This Cinnabon cinnamon swirl cheesecake is super creamy – baked without a waterbath and has the perfect smooth top (no cracks!). Buttery graham cracker base, Greek Yogurt cream cheese filling, and a cinnamon swirl in the middle that you don’t want to skip. Give it a try!Jump to Recipe 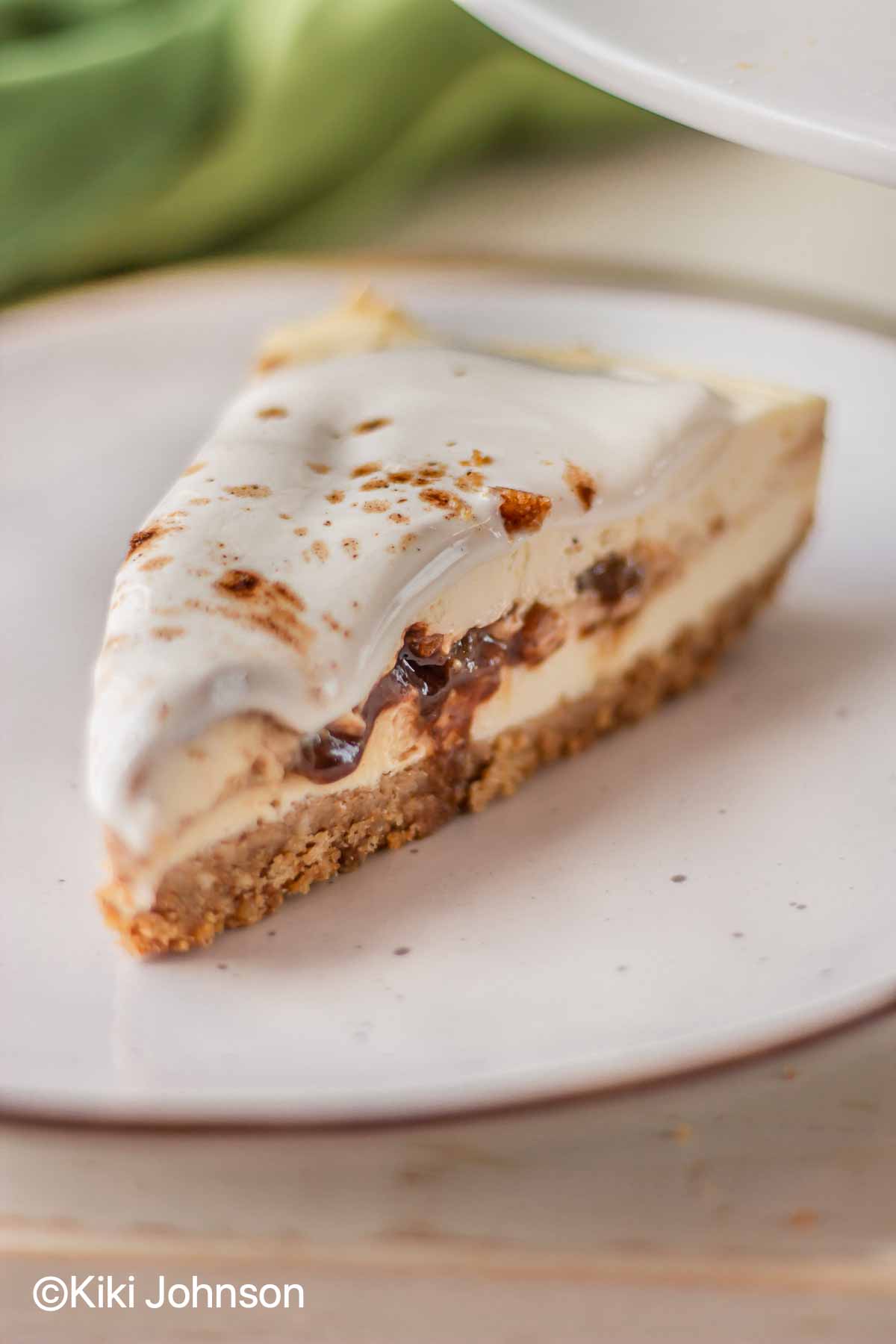 Cinnabon Cinnamon Swirl Cheesecake with a cookie crust for all cinnamon bun fans.

Cheesecake. I love making them. While I usually go for European-style baked cheesecakes like my German Cheesecake, I also enjoy rich and creamy American cheesecakes, like this cinnamon roll cheesecake.

How do you get the taste of cinnamon rolls in the cheesecake ?! Very easily.

The cinnabon cinnamon swirl cheesecake consists of 3 layers: biscuit base, cream cheese filling with cinnamon roll swirl and a cream cheese topping. But don’t worry, the recipe is very straightforward and super quick.

The bottom consists of digestive biscuits that are ground and mixed with cinnamon and melted butter. Use graham crackers or cinnamon-scented biscuits or, if you love them as much as me, lotus biscuits.

Do you still have a few speculoos cookies left from Christmas? Great – throw them in! Very important, the pinch of salt, because it emphasizes the sweetness even more.

The filling – soft, delicious and rich cream cheese filling, which is lightened up with a little yogurt and is packed with the flavor of cinnamon, butter and vanilla. Now for the filling in the filling. 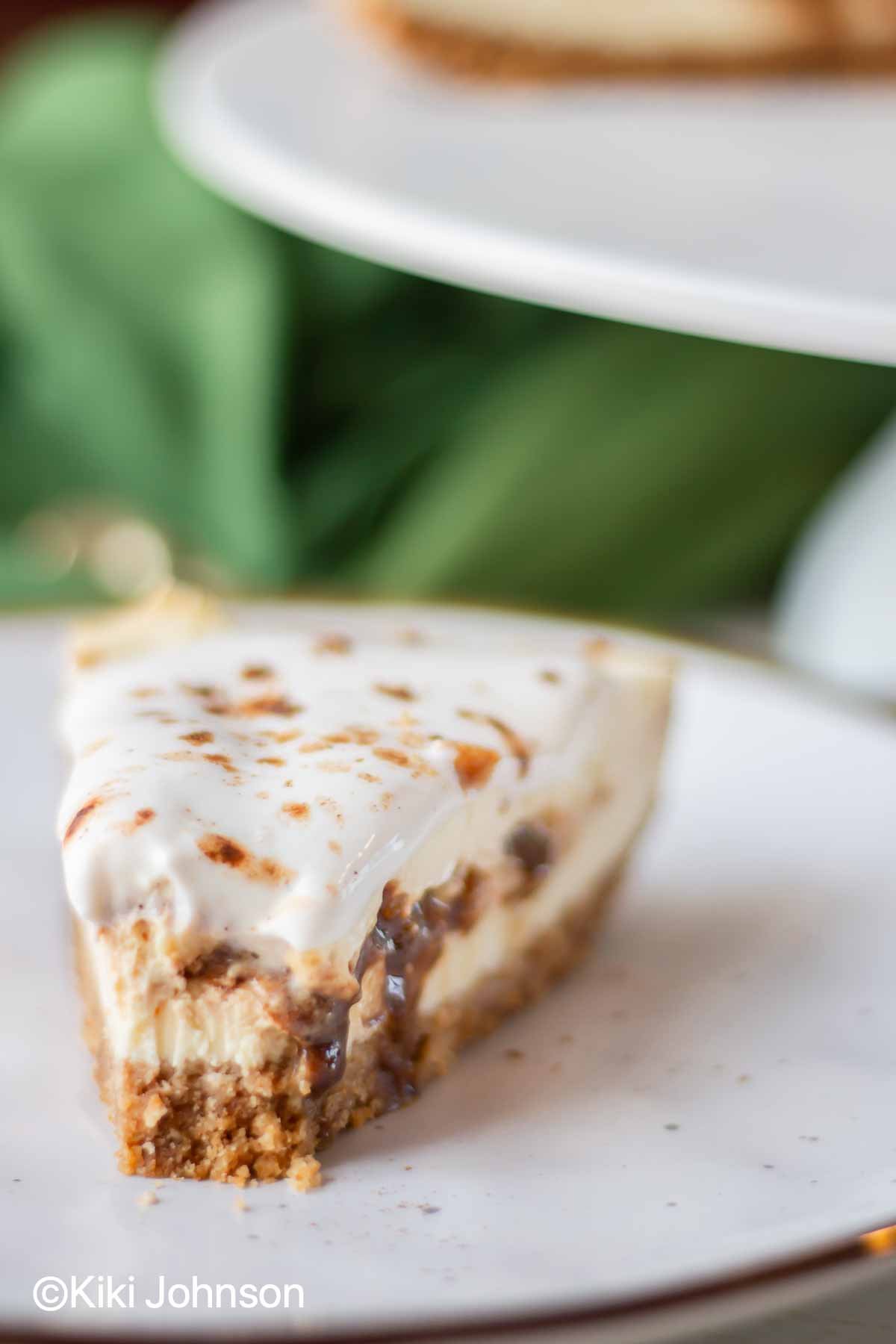 That moment of happiness when you take a homemade baked cheesecake out of the oven and it is wonderfully smooth and does not have any cracks – even after it has cooled down. Hard to beat.  So what can you do to prevent the cheesecake from cracking?

I don’t like baking in a water bath because it’s too cumbersome for me. But hey, I have several simple tricks up my sleeve

Bake the cheesecake at the right temperature

Cheesecake doesn’t like high heat. It is best to bake your cake at low heat. If the oven is too hot, the surface will quickly turn too brown while the inside of the cheesecake is not yet fully baked. The result: cracks.

Those who bake often should get an oven thermometer to get an accurate temperature reading of your oven. All ovens are different and have their quirks. Low and slow is the way to go when baking a cheesecake.

Less is more – stir the cheesecake filling as little as possible. If you whip the cream cheese filling too hard, too much air will be added to the mixture and the cheesecake will crack in the oven.

If you shock the cake with a rapid and excessive temperature difference, cracks will appear in the cheesecake.

Therefore, don’t take your cheesecake straight out of the oven after the baking time is up, but let it slowly cool down in the oven for about 15 minutes with the door slightly open. I just stick a wooden spoon in the door.

Avoid opening the oven door while the cake is baking. Once it’s baked and the center is almost set, turn the oven off and leave the cake inside with the oven door held slightly ajar with a wooden spoon until it has cooled. 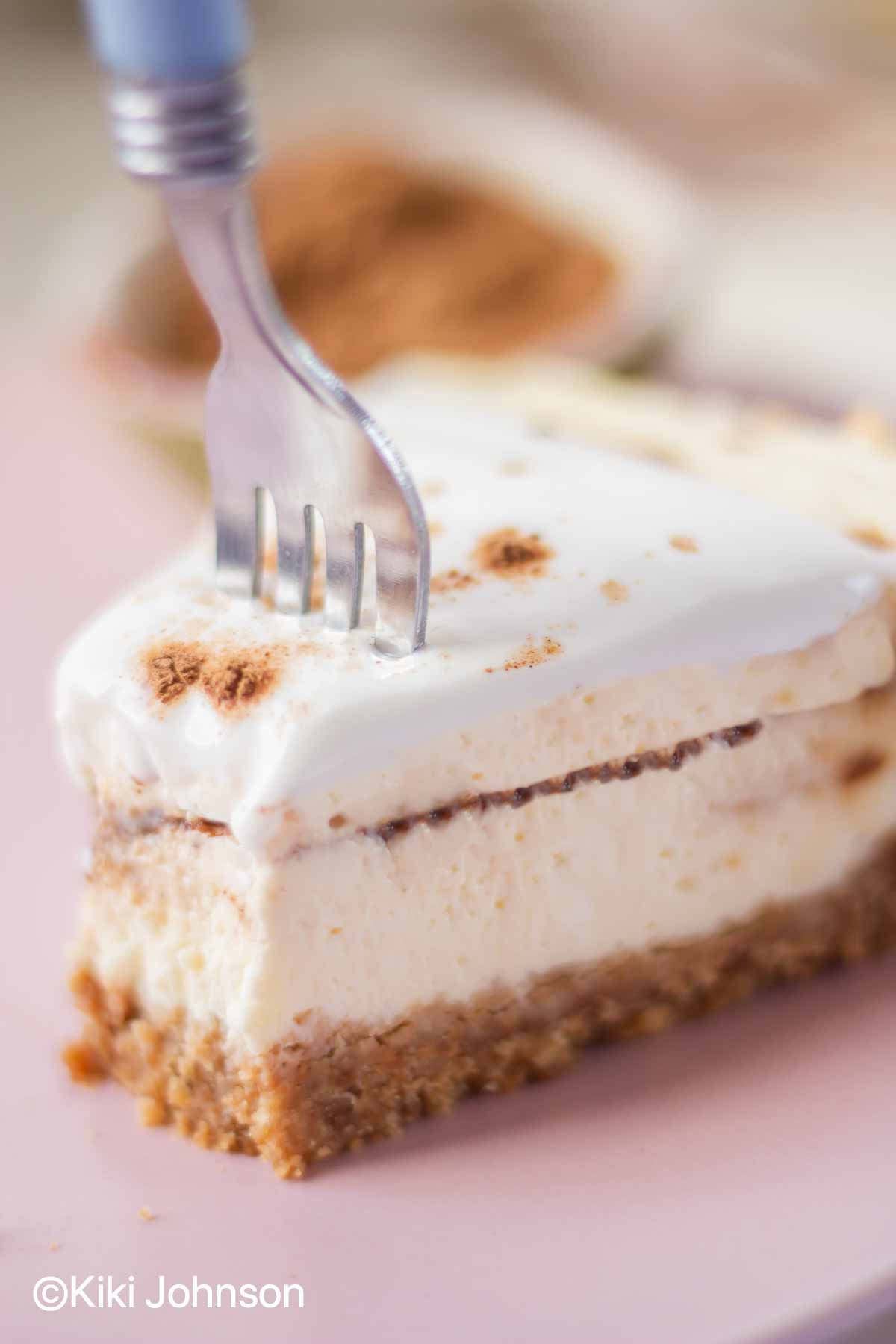 When is the cheesecake done?

For a perfect cheesecake, use a cooking thermometer and take it out of the oven when the cheesecake reaches 150 degrees F. at the center to avoid over baking.

How to Freeze Cheesecake

Cut the cheesecake into portions, if you like, or leave it whole. Place the cheesecake on a cardboard round. Wrap it well in plastic wrap, then foil. Freeze for up to 1 month. After one month, it will lose flavor.

This Cinnabon Cinnamon Swirl Cheesecake is super creamy - baked without waterbath and has the perfect smooth top (no cracks!). Buttery graham cracker base, Greek Yogurt cream cheese filling and a cinnamon swirl in the middle that you don't want to skip. Give it a try!