Best Homemade Cinnamon Swirl Ice Cream – an easy Cuisinart Ice Cream Maker Recipe that can be also be made without a gelato maker! Serve it with apple pie! Jump to Recipe 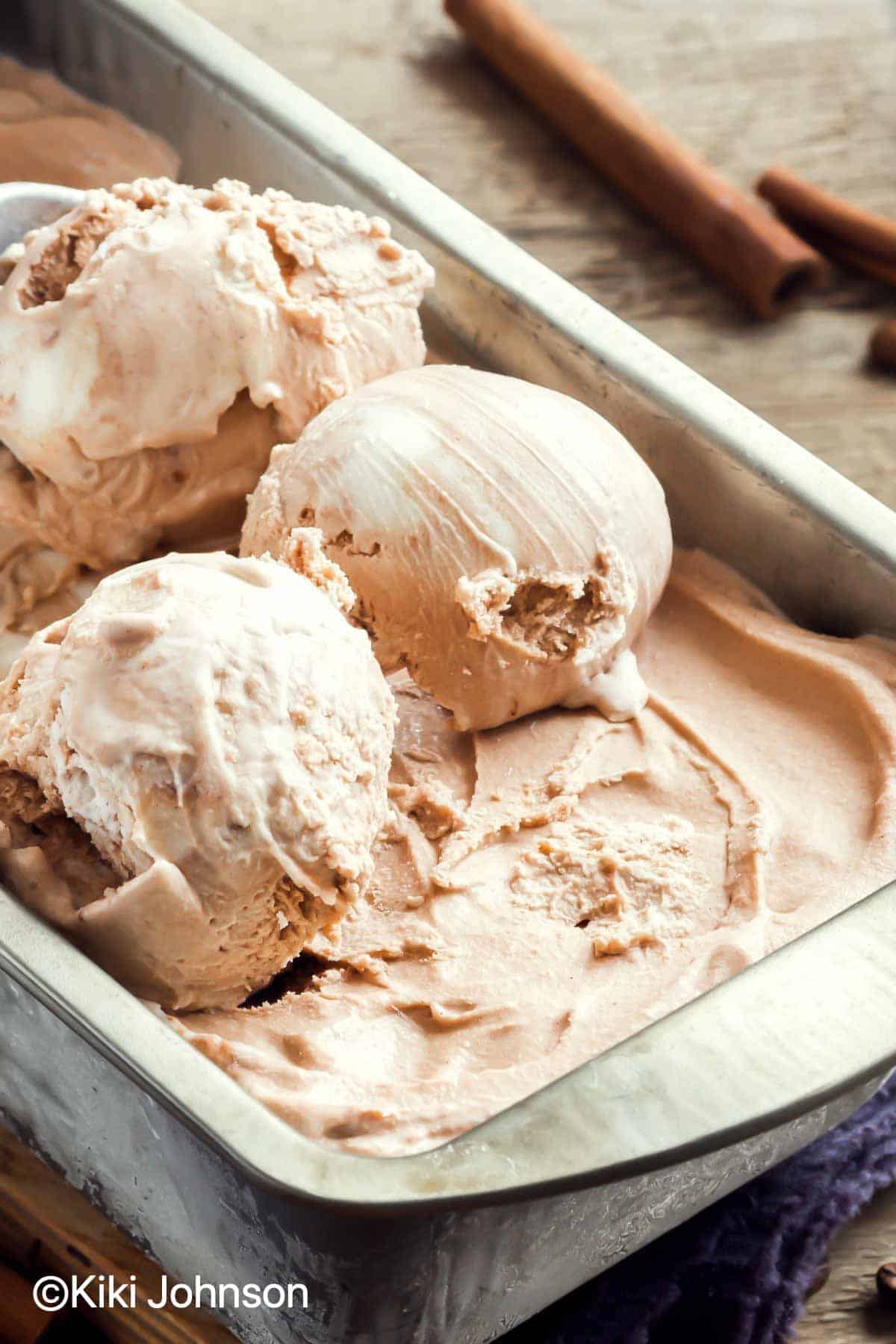 The best ever Cinnamon Swirl Ice Cream made within minutes in my Cuisinart Ice Cream maker! There is no better way to top German Apple Streusel Cake or slice of my caramel apple pie. This Cinnamon Ice Cream with brown sugar cinnamon swirl is rich with the flavors of the holidays. It’s smooth, creamy and perfect for adding to all your seasonal cobblers and cakes.

Cinnamon is the undisputable number one spice during the holiday season and Christmas. Pulverized coziness, the Christmas Spirit’s Fairy Dust. We smell cinnamon and immediately think of apple pie, warm cinnamon rolls fresh from the oven. But cinnamon also ups the cozy for all cold desserts and can turn a scoop of ice cream into a heart-warming experience!

I used my favorite ice cream base, which involves heavy cream, and egg yolks. Egg yolks give your ice cream the greatest texture and it’s rare that I make a batch of ice cream without this step. Try it once and you’ll be a believer.

To take things to the next level, we add a cinnamon brown sugar swirl. Not only does it look extra pretty, it also makes for a more exciting taste experience.

Make the ice cream base and turn on the Cuisinart® ice cream maker; pour the mixture into the frozen freezer bowl and let mix until thickened, about 15 to 20 minutes. The ice cream will have a soft, creamy texture.

How long does the Cuisinart ice cream bowl need to freeze?

In general, the freezing time is between 6 hours and 22 hours. I just leave it in there always. That way I can take it out any time for immediate use. To determine whether the bowl is completely frozen, shake it. If you do not hear the liquid moving, the cooling liquid is frozen.

How do you know when ice cream is churned enough?

If you don’t have an ice maker or gelato maker, you can freeze the ice cream base in an ice cream container or loaf pan. Every 2 hours you take the container out of the freezer and stir the base with an electric hand mixer or fork to break the ice crystals. You can also do this with an immersion blender. You want to do this 3-4 times, otherwise, your ice cream will not have a smooth consistency. A bit of a hassle but it works! Prepare the cinnamon swirl when the ice cream is already nice and creamy and swirl it into the ice cream base towards the end.

For the ice cream base

For the cinnamon ripple 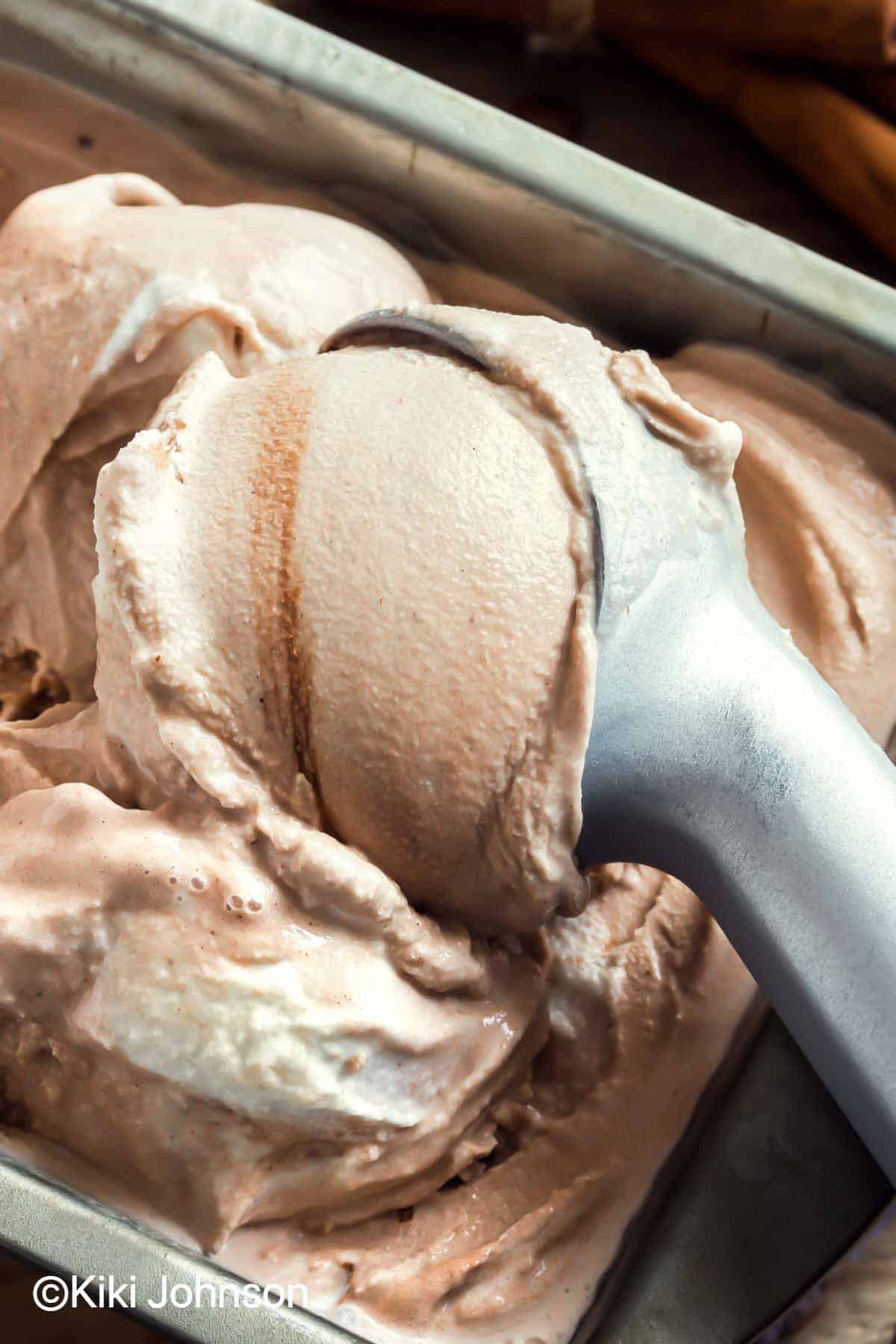 How do you prevent ice crystals in ice cream?

If you are short on time, buy a good quality ready-made vanilla ice cream, soften for 15 minutes, then stir the cinnamon ripple sauce through it and refreeze.

★ Did you make and love this cinnamon swirl  ice cream recipe? Give it your review below! And make sure to share your creations by tagging me on Instagram!

Best Homemade Cinnamon Swirl Ice Cream - an easy Cuisinart Ice Cream Recipe that can be also be made without a gelato maker! Serve it with apple pie!

The ice cream will keep in the freezer in an airtight container, tightly wrapped in cling film, for up to 1 month.