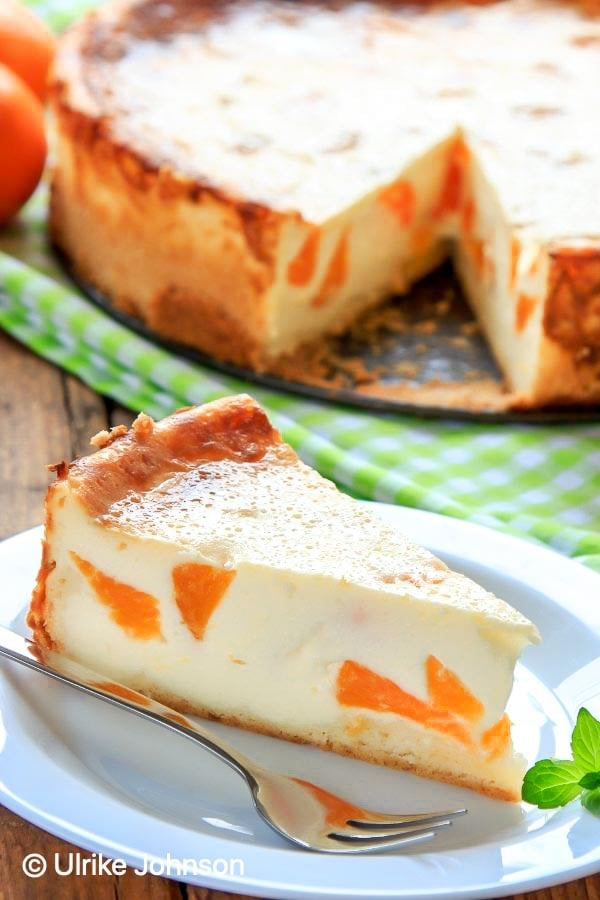 This Authentic German Cheesecake with Mandarin Oranges is also called “Lazy Girl Cake” as it is so easy and quick to make with simple ingredients that are all staples of traditional German Baking.

When it comes to traditional German cheesecake fillings, we are talking about a mix of quark, sour cream, eggs and vanilla pudding custard powder. That’s how we make cheesecake in Germany. But don’t panic if you have no idea where to get quark or the custard powder. I will tell you all the substitutions in a secind. But let’s talk about the traditional version first.

The base for any German cheesecake recipe is a simple shortcrust pastry. Simple as in mix it and press it straight into the pan – no chilling of the pastry needed! This authentic German cheesecake is quite a bit lighter than say, an American New York Cheesecake. The filling is made with low-fat quark instead of full-fat cream cheese and we add sour cream instead of whipping cream! Lemon and vanilla give the German Cheesecake a fresh flavor.

This German cake would not be complete without slices of sweet and floral mandarin oranges! Such a favorite in my little Bavarian village!

Why I love baking with quark:

I love baking cheesecake with quark! Quark is a fresh dairy product made by adding lactic acid to milk, and it is very similar in flavor to yogurt or cottage cheese. It is a very healthy dairy option, as it has fewer calories and lower levels of fat than cream cheese.  You can get it in the dairy-aisle, close to ricotta or mascarpone. But hey, you can also make your own quark.

What can I use instead of quark in this German Cheesecake recipe?

You have several possibilities! You could use either all mascarpone or half Mascarpone cheese and half thick Greek Yogurt. Both quark and mascarpone are smooth, yet thick, dairy products, so when replacing one for the other, they will create similar textures. However, this version will be richer and lacking the refreshing tang of quark.

Another way is to Combine 2 parts ricotta cheese with 1 part full-fat sour cream.

Another good substitution for the quark is cottage cheese, but you want to place it in a food processor, add a bit of milk, and process until very smooth.  Cream cheese seems like an easily-accessible substitute in this German cheesecake recipe. However, I do not recommend using Philadelphia instead of quark for this recipe. If you can’t seem to find any other replacements, that you could use it and add an extra hint of acid, such as lemon juice as cream cheese is not quite as sour or tangy as quark.

Can I make this German Cheesecake Dairy-free?

For a dairy-free version of this quark cheesecake, use margarine instead of butter and use homemade vegan quark using this recipe. Yes, you can simply strain some plant-based yogurt to make dairy-free quark.  Instead of sour cream, use a dairy-free yogurt with no flavor and soy sour cream that is processed with soy cream cheese. 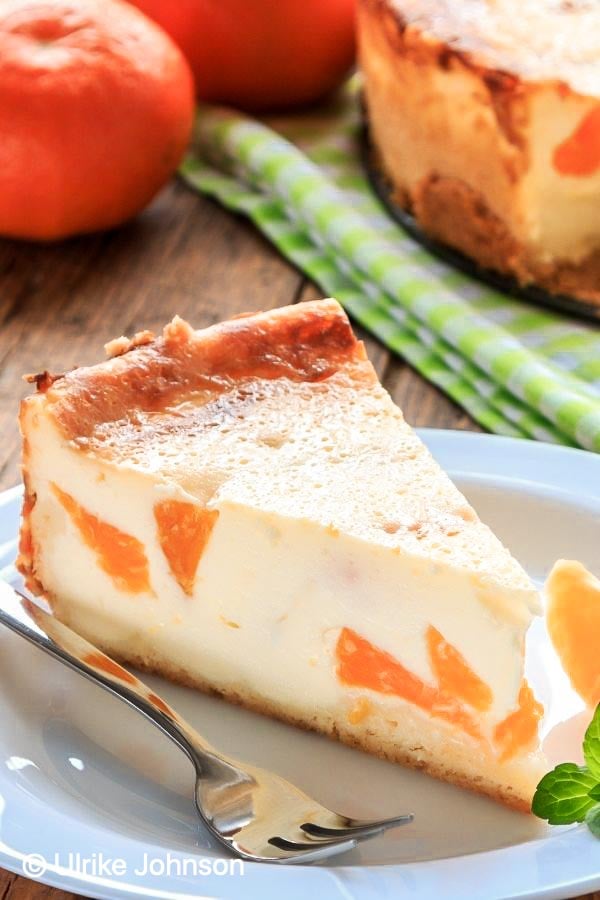 ★ Did you make and love this German Cheesecake recipe with mandarin oranges? Give it your review below! And make sure to share your creations by tagging me on Instagram!

You can also make this German Cheesecake recipe with apricots, red currants, raspberries, blueberries or peaches!