Granny’s German Apple Fritters recipe is perfect for fall and Oktoberfest season but really, these old-fashioned beer-battered apple rings are a delicious dessert all year round! 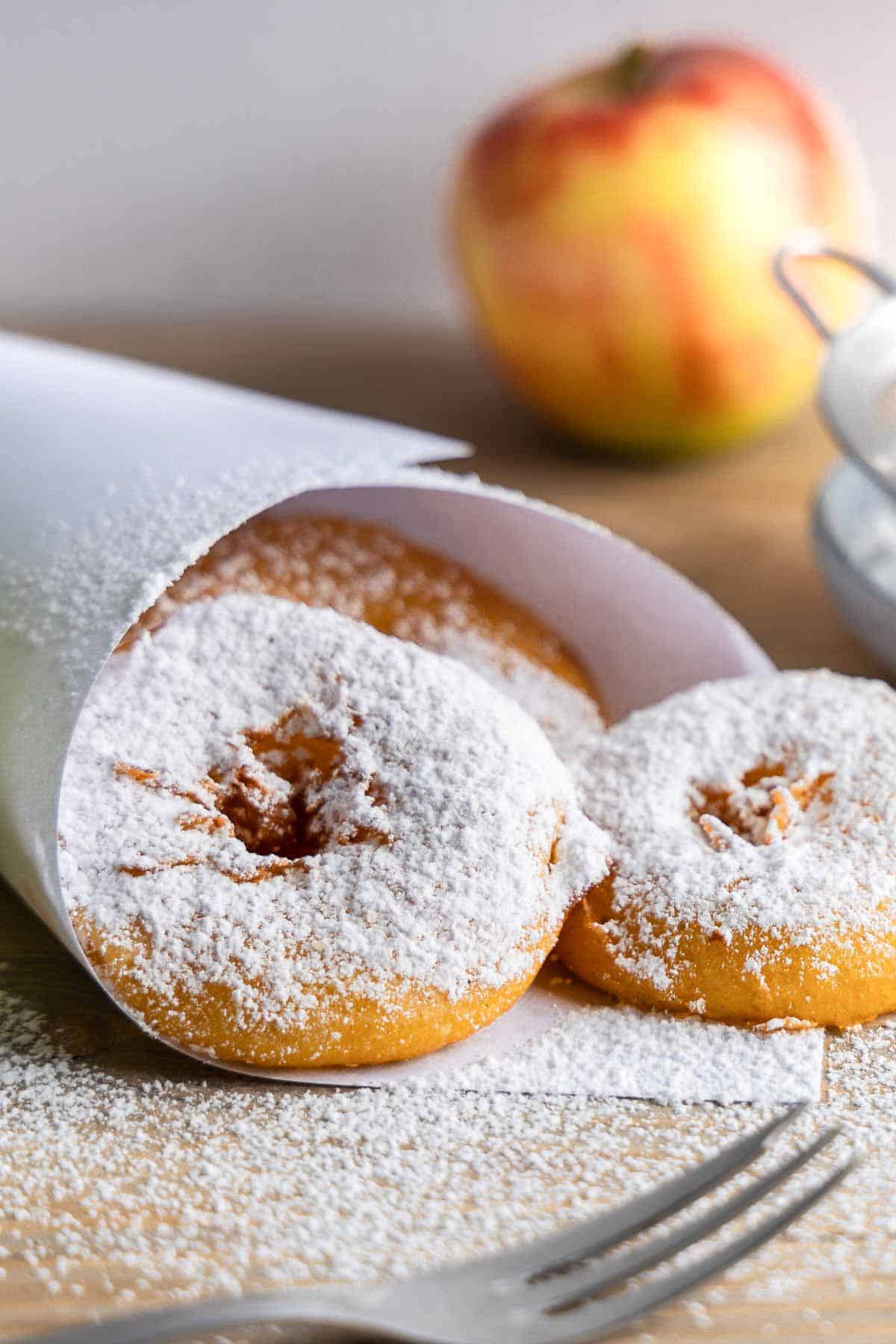 This German Apple Fritters recipe is one of my favorite things to make in late summer and fall. Granny’s old-fashioned beer battered apple fritters (Apfelküchle) served with vanilla sauce are such a great afternoon snack but also special enough to serve as a dessert.

Here’s my granny’s tried and tested German Apple Fritters recipe that has been in our family for generations. Along with her German apple cake, these apple fritters would be on the menu all throughout apple season! 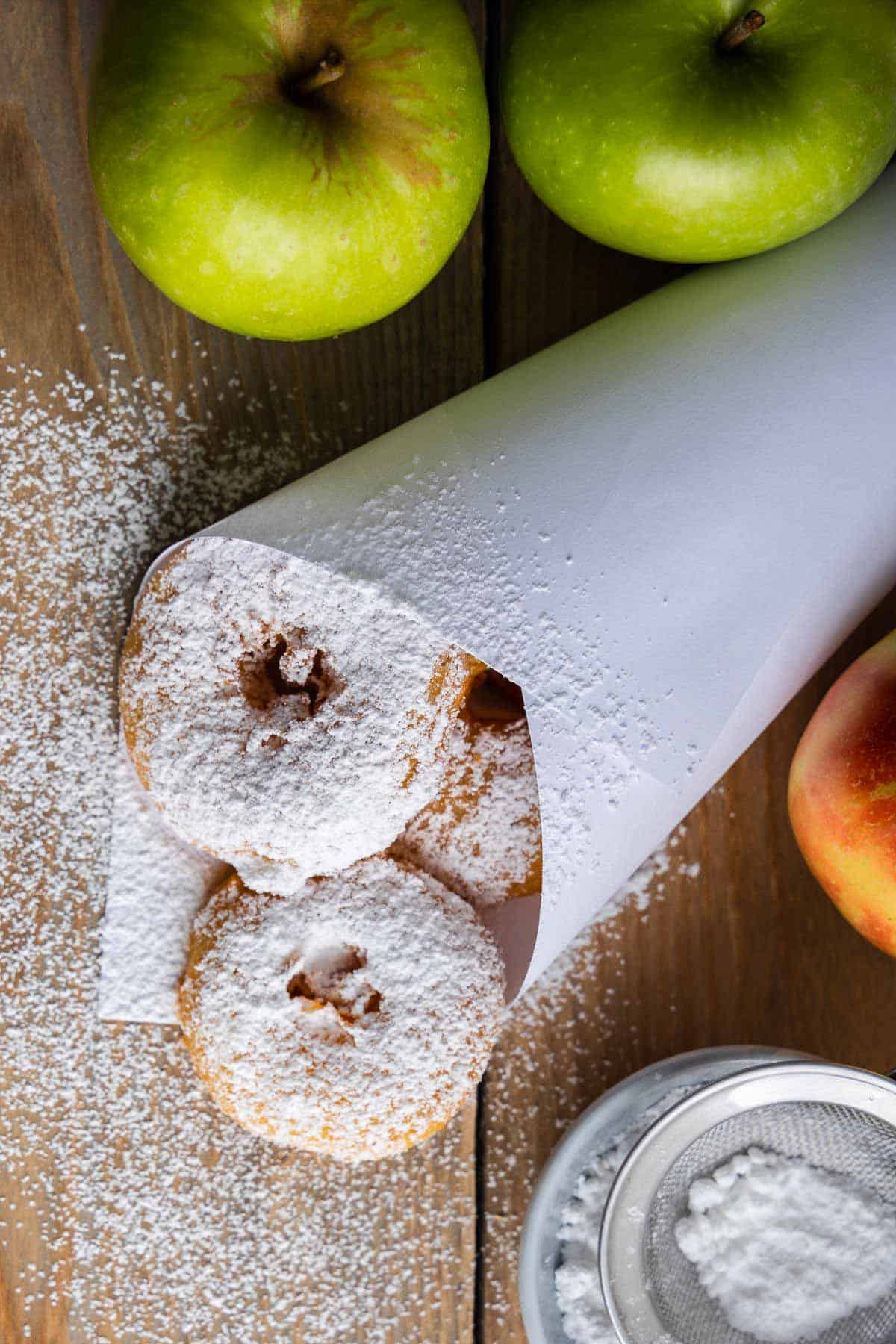 Beer battered apple rings are a hugely popular German dessert you will find on many dessert menus. This authentic recipe is made with simple ingredients like fresh apples from the orchard, flour, eggs, and a splash of beer and it tastes spectacular. Trust me, these delicious homemade apple fritters are utterly addictive!

Apple fritters are basically whole apple rings tossed in a delightful, airy batter and shallow fried in clarified butter or oil in a pan. Known as Apfelküchle these little crispy apple cakes are one of the most popular late summer and fall desserts and especially during Oktoberfest season.

German apple fritters are usually served warm with vanilla sauce or vanilla ice cream or cinnamon ice cream but I also often serve them with just a dusting of icing sugar.

Which apples shall I use?

I generally prefer tart apples for this apple fritters recipe. The slight sourness of the apple contrasts so well with the sweetness of the vanilla sauce, plus you serve them sprinkled with plenty of icing sugar or some cinnamon sugar.

Make the apple fritter rings ahead of time:

Want to serve German apple fritters as a dessert for a dinner party? Amazing!

Peel, cut, and core the apples and cut them into slices. Now, for an extra boost of flavor, you can go ahead and place the prepped apple slices in a gallon freezer bag and add some sugar, lemon juice, and rum.

About 3/4 cup sugar, 2 tbsp lemon juice, and a splash of rum. You want to coat the rings well, then close the bag and let them soak in the liquid.

When reparing these kinds of fritters there are few tricks that will make the end results FANTASTIC. 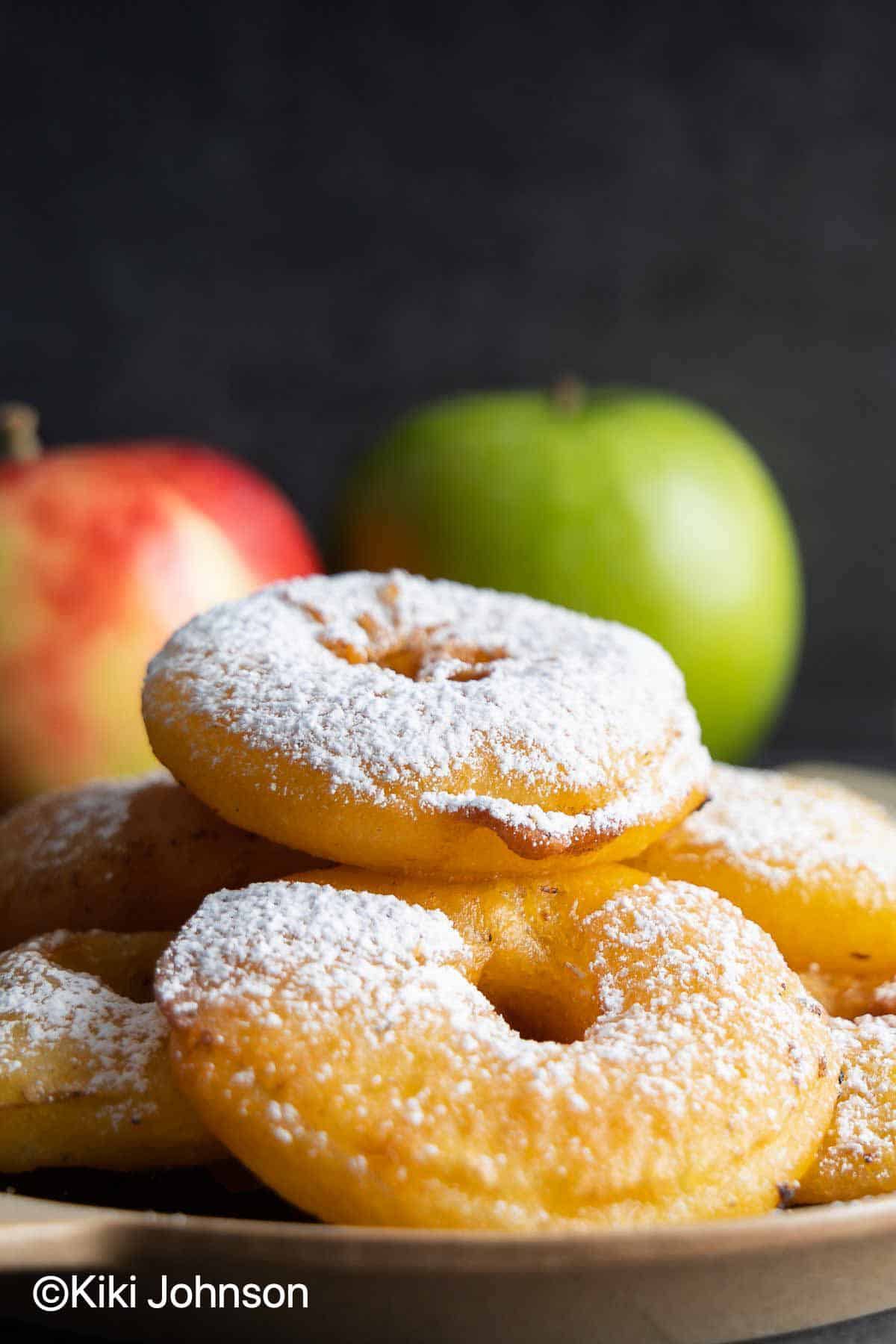 For best results, I recommend you prep the apples about an hour ahead of time and let them soak in the sugar, rum and lemon mix but as I stated above, it’s optional. You can also start with the batter and cut the apples right before you fry them so they do not turn brown.

How to serve German Apple Fritters

If you make them for breakfast or as a snack, simply dust them with powdered sugar or cinnamon sugar! 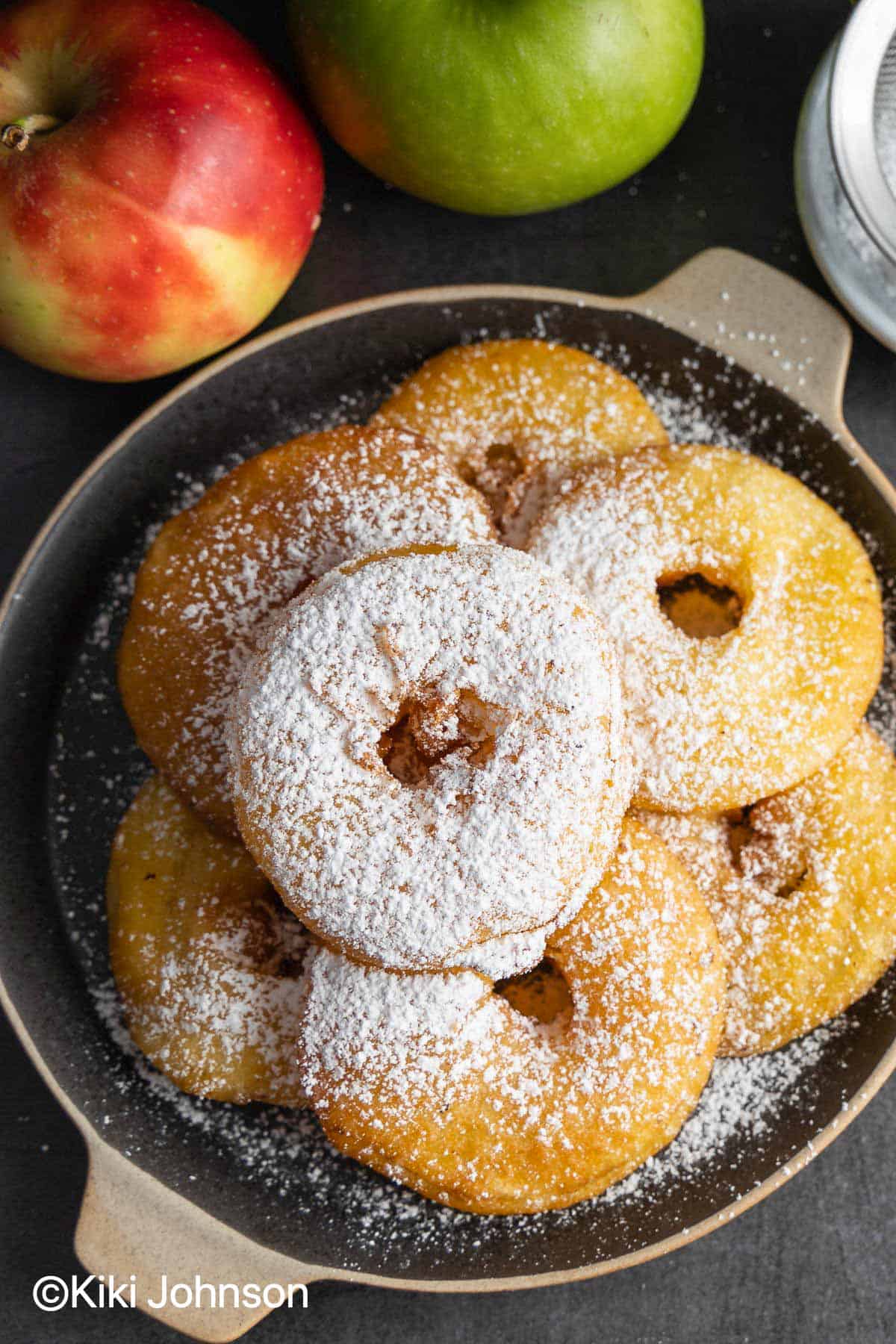 How to core an apple without an apple corer:

Take a pairing knife. Set the apple upright on your cutting board and hold it steady. Use the other hand to make four incisions around the center of the stem.

Each cut should be about 1/4 inch from the center depending on the size of the apple. As you make the cuts, wiggle the blade of the knife straight downward, so you’re really slicing deep into the apple.

Turn the apple upside-down and repeat the whole process on the bottom. When slicing into the apple, try to make contact with the existing cuts. You’ll know you got it right when the knife slides easily through on each side.

Use your thumb to push the core up from the bottom. Voila! 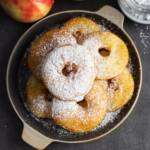 Double the recipe or triple. I always calculate 1 apple per person