Spiced French Apple Cider Donuts Recipe aka French Crullers – the best easy fall treat for the cozy season! Soft and airy on the inside with a crispy outside and a hint of apple cider flavor intensified by an apple cider maple glaze! 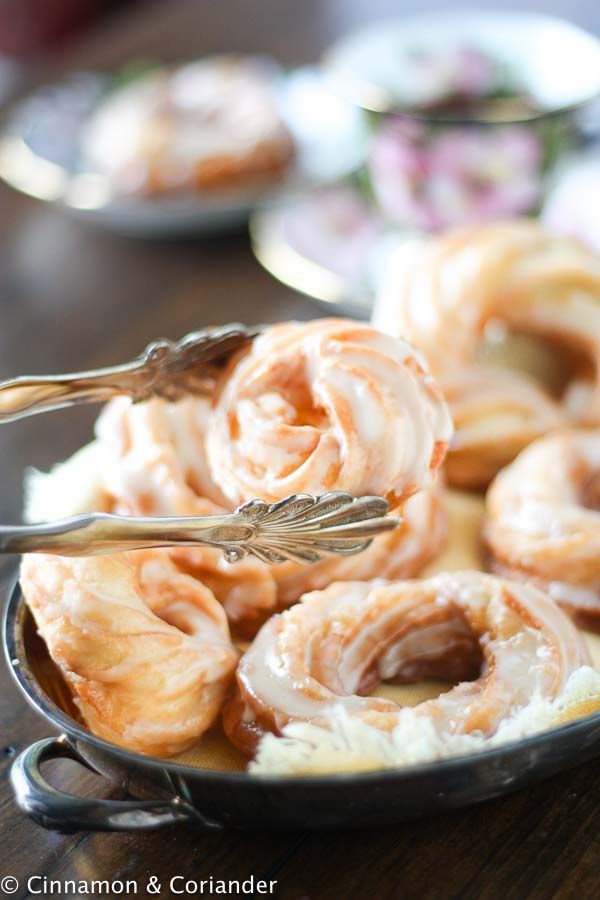 It is the season for all things apple cider! Have you ever had an Apple Cider Donuts? No? They are the best! Dunkin’s put them on their fall menu, go have one, then get ready for the next level: Apple Cider French Crullers!

Nope, these are not the cake donut kind but their light, eggy, fluffy cousin made with a choux dough? Life-changing!

What is a French Cruller?

French crullers are light and airy on the inside with a crisp crunchy outside that is a gorgeous golden hue.

An authentic French Cruller is traditionally made from fried choux dough. This crullers recipe isn’t really too different from the Spanish doughnut treat, churros. In fact, it’s all pretty much the same thing. Crullers are shaped into rings rather than straight lines.

Because these Apple Cider Donuts are made with a “oh la la” choux pastry, they are considered French crullers.

Choux mistakenly has the reputation of being tricky to make – trust me, it really isn’t. Using choux pastry instead of yeasted donut batter makes the process actually so much quicker than yeasted donut batter. You just make the pastry, pipe it into a circle, and fry it. No fussing over yeast, proofing, or cutting.

Since it’s a wet batter, the moisture from the apple cider quickly evaporates as the cruller hits the hot oil. This is what causes the air pockets inside. 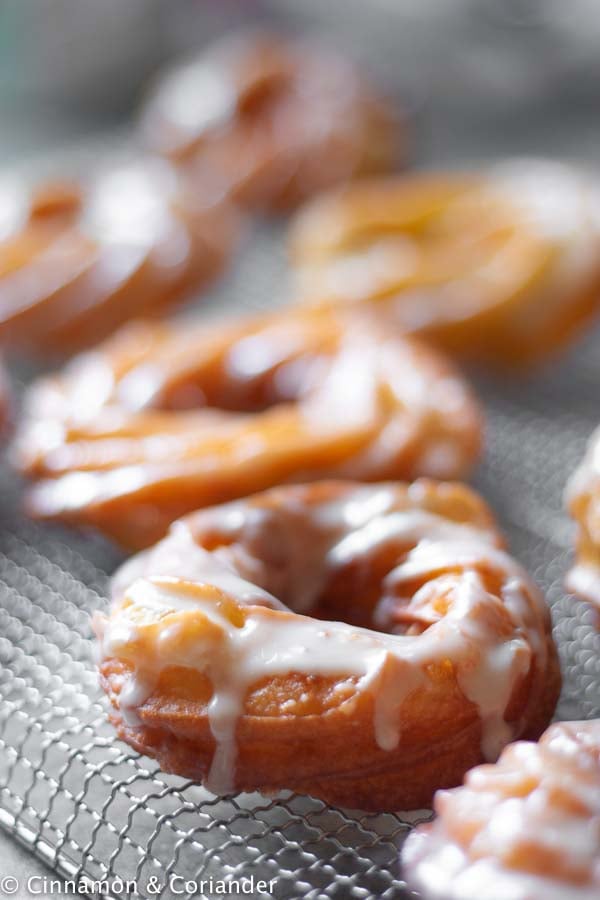 How to make Fried Apple Cider Donuts aka French Crullers:

How to make Choux Pastry:

Traditional French crullers start with a homemade quick choux pastry. You might not have heard of this pastry but if you have had desserts like cream puffs or beignets you already know it.

Don’t be intimidated by the French name, it’s very easy to make. You start by heating butter, sugar, salt, ground spiced, vanilla, water and apple cider in a heavy-bottomed pot. Then dump in the flour and quickly stir until a dough forms. Keeping the pot on the burner, keep stirring the choux until it forms a large ball. You know your choux is done when it starts to leave a white residue on the bottom of the pot.

Take the pot off the heat to cool then mix in the eggs one at a time. Continue adding the eggs until you get a smooth, pretty thick, yet glossy paste. When you lift up your whisk it should fall after roughly 3 to 4 seconds. It should be able to fall from the spatula on its own but not be too wet that it can’t hold its shape. Remember you want to pipe it.

To get the consistency just right, you may not require the entire amount of eggs stated in the recipe!

Using a star tip, pipe the homemade choux pastry in rings that you already drew onto sheets of parchment paper. Now we want to freeze the baking trays with your crullers so they get easier to handle and hold their shape better when frying. I do this while I heat up my oil. 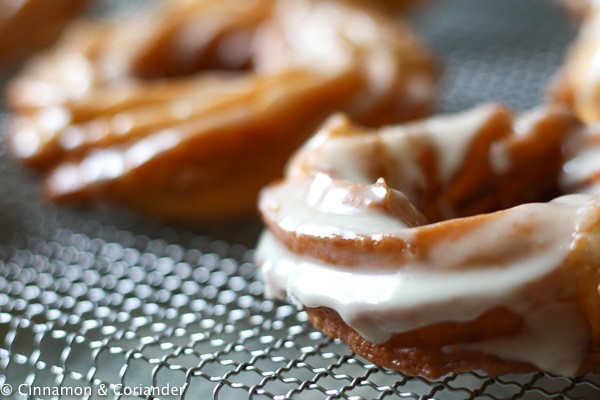 How to fry your French Apple Cider Donuts:

Now on to frying: Drop the choux rings into your hot oil (375 F – use a kitchen thermometer). Fry them for 3 minutes per side. Once done, transfer the crullers to a drying rack and then dunk in icing. There you have it! Fresh French crullers. 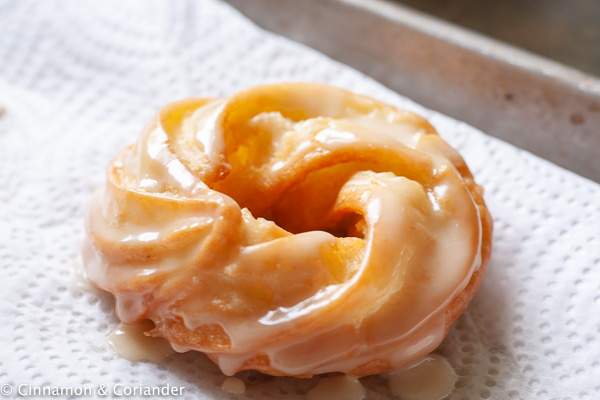 Now all you need to to is stir together the ingredients for the apple cider maple glaze. 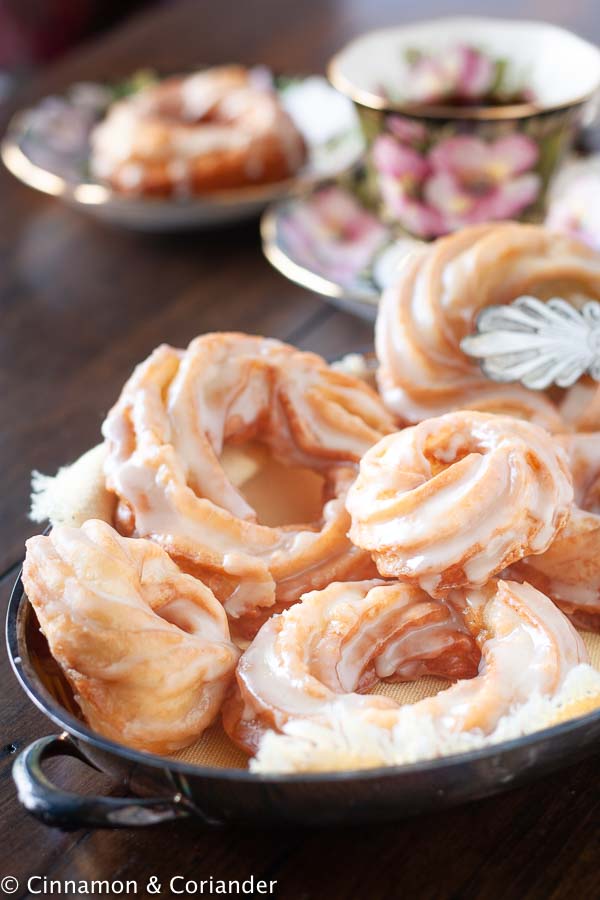 Can I make these Apple Cider Donuts in advance?

If you need to make these French Crullers in advance, you can pipe the rings and freeze them. Pop them into the fryer just before serving. 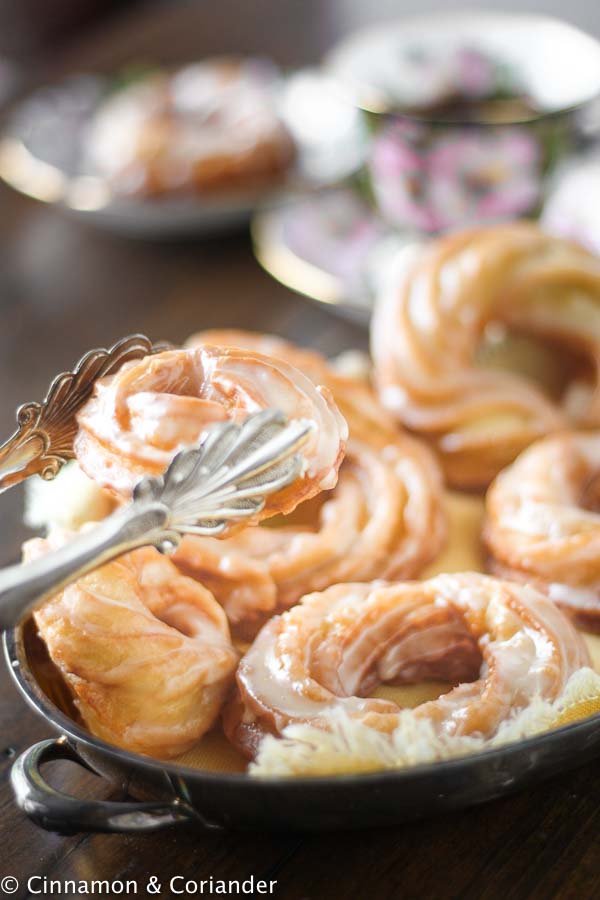 These Apple Cider Crullers are actually much easier to make than they look. But be warned, you won’t be able to keep them around for long as they are highly addictive! But they are best eaten fresh anyway so go nuts!

★ Did you make and love this apple cider donuts recipe / French apple cider crullers recipe? Give it your review below! And make sure to share your creations by tagging me on Instagram!

Glazed Apple Cider Donuts ( French Crullers Recipe) - the best easy fall treat you will ever make! Fried, airy and light apple cider donuts with a delicious apple cider and maple syrup icing that will make you want to lick your fingers!