No one would think this Baked Vegan Lemon Tofu Cheesecake with Poppy Seeds is a Tofu Dessert!

Guys, I bake a lot. I made my first cake when I was about 4 years old. Admittedly, it featured grapefruits and mustard and was absolutely horrid but you know where I am getting at with this, right!

After 25 years of baking, it takes quite a bit for a cake recipe to truly knock my socks off.

This vegan lemon poppy seed cheesecake tho??! OMG, where to begin?

No cream cheese, no eggs, no sour cream. But somehow it ends up light, creamy and slightly tangy just like the real thing!

Magic, you ask? Yeah, kind of!

The secret to making the perfect baked vegan cheesecake:

This vegan lemon poppy seed cheesecake recipe is different as it uses a mix of silken tofu, coconut cream, and soaked cashews for the cheesecake filling. 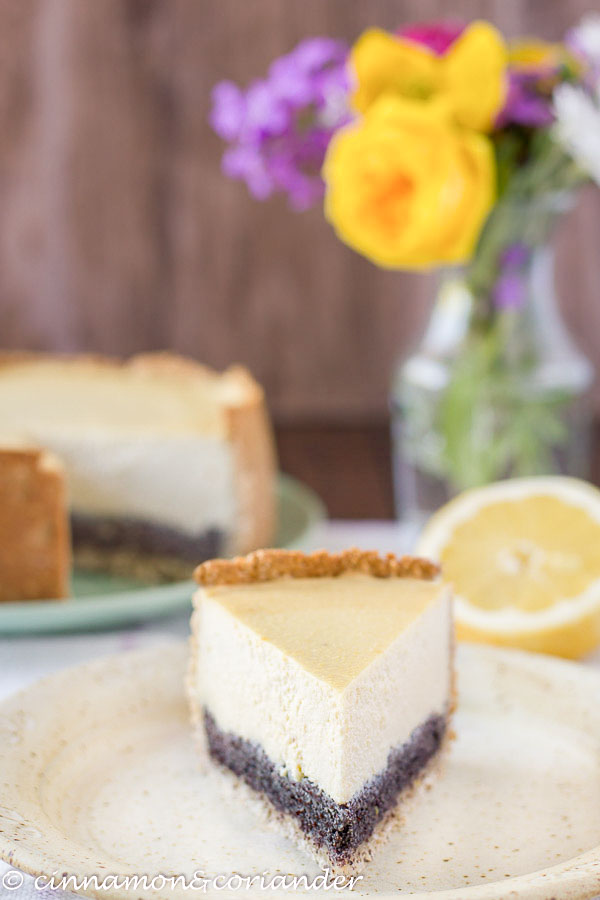 Which ingredients do I need for making vegan tofu cheesecake?

The gluten-free cheesecake crust is a simple mix of rolled oats, maple syrup, shredded coconut, and banana. I grind the coconut and rolled oats separately before I blend them with the rest of the ingredients.

As you might know,  I grew up in Germany where poppy seed cakes and desserts are super popular. The ultimate comfort food dessert – but man, rich af!

Because we don’t sprinkle with poppy seeds, we pour! We usually grind them up, mix them with sugar, butter, rum and milk and cook them into a thick black paste that tastes and smells like heaven in a pot!

Cakes and desserts with poppy seeds are super popular in Eastern Europe but less common in Canada and the US.

The first time I served my husband a slice of poppy seed cake, he told me it looks like a slice of an ashtray. And whether he could drive after eating that.

So yeah, European poppy seed desserts can look a wee bit scary but guys, poppy seeds are the bomb! They taste nutty – a bit like almonds, or even better – marzipan.

Why this Vegan Lemon Poppy Seed Cheesecake will be your new favorite springtime dessert:

For more delicious vegan Easter recipes, make sure to check out my Vegan Carrot Cake Truffles or whip up this Vegan Lemon Tart.

★ Did you make and love this easy recipe for vegan tofu cheesecake? Give it your review below! And make sure to share your creations by tagging me on Instagram!

For the poppy seed filling