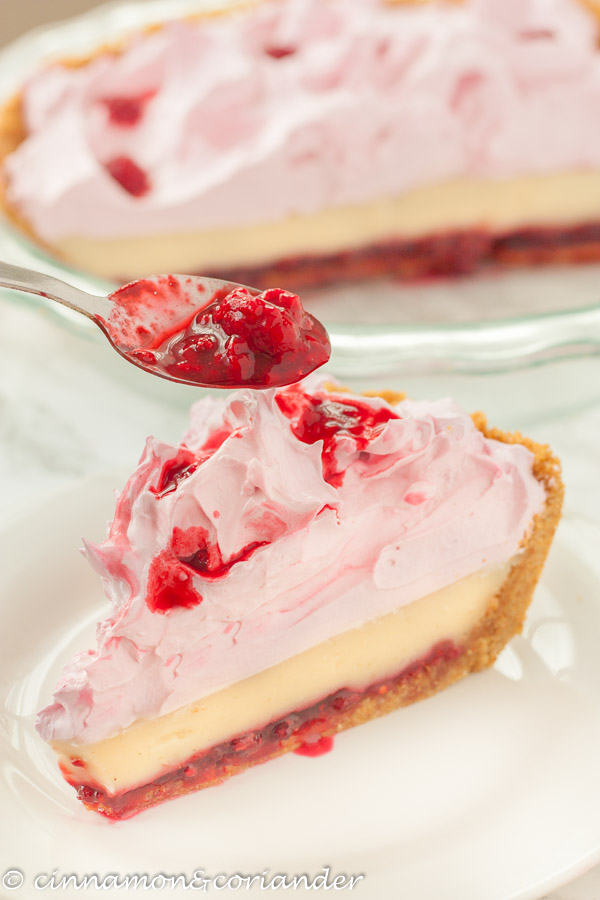 Love Peanut Butter and Jelly? This easy Canadian Flapper Pie recipe is a great novel way to serve it to the gang. I mean, who could say no to a slice of this pink beauty?

What is Flapper Pie?

Flapper Pie is a super simple pie recipe consisting of a graham cracker crust, filled with vanilla custard and topped with mounds of light and fluffy meringue.

It’s been a staple dessert in the Canadian Prairies for decades and it makes an appearance at all family gatherings. I guess it grew so popular in the prairies because the pie ingredients are easy to find on farms and don’t depend on seasons.

Why it was called a flapper pie I don’t know other than it was the era of the “flapper,” or the 1920s when young women grew bolder, wore short skirts, bobbed hair and smoked in public.

Flapper Pie is not the most modern and fashionable of bakes, no, this is an old-fashioned pie granny would make for every family gathering. But let’s face it – that’s exactly the kind of dessert we crave most after a long, stressful week! Am I right?

I had never heard of it until I came to Canada and first tried it in a little cafe in Calgary. It was love at first bite. 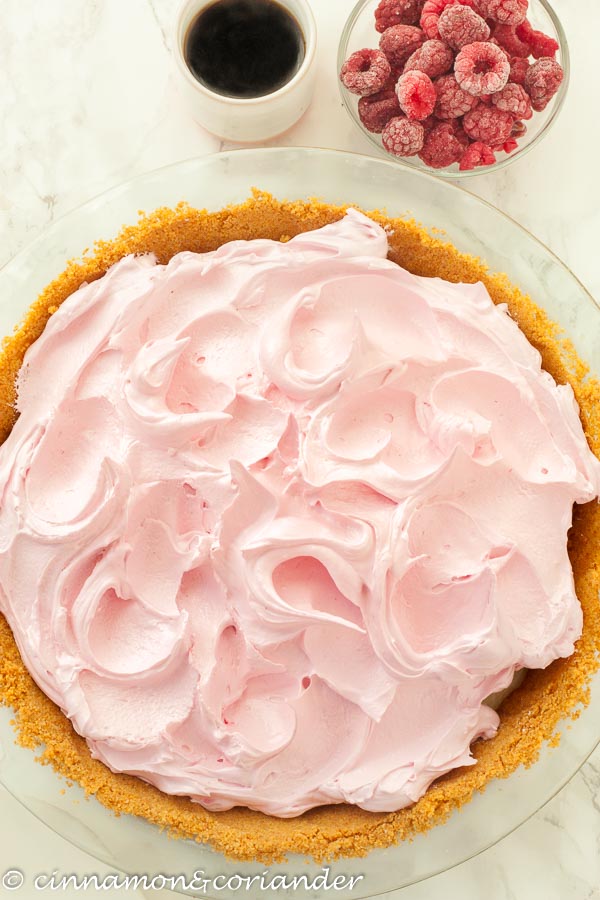 I developed this flapper pie recipe for a Canadian cookbook I published for the German market. I wanted to create a summery twist on the classic while sticking with the basic components cookie crust, custard, and meringue.

And how to make a perfectly nostalgic pie even more nostalgic? Add pb and j!

I made this peanut butter and jelly pie about 15 times until it turned out just right and dang did we love life with all that pb&j goodness sitting in the fridge!

Why this Peanut Butter & Jelly Flapper Pie is the bomb.com:

Peanut butter and jelly is everybody’s favorite. A no-brainer, really but we’ll still make the effort and build a whole pie around this glorious combination.

The combination of peanut butter and jelly has always been the gold standard when it comes to the contrast between sweet and salty and makes this traditional Canadian pie feel less sweet and heavy than the original version.

Usually all recipes for flapper pie call for a simple meringue that is baked until golden brown. The topping here is a Swiss Raspberry Meringue that will remind you of a creamy raspberry marshmallow.

Don’t be afraid – the raspberry meringue sounds complicated but it’s actually a breeze to make. All you need is a kitchen thermometer, some raspberries, sugar and egg whites! Easy peasy. 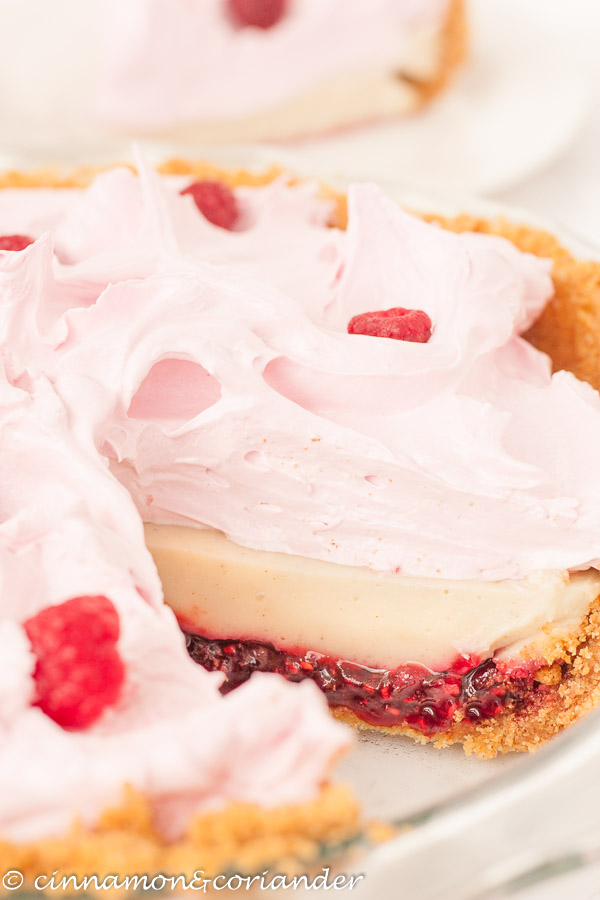 What is Swiss Meringue?

Swiss Meringue is the most stable of all meringues plus it requires no baking, which I love. Because I always kind of worry that the raw egg whites in an underbaked meringue topping might be unsafe to eat. Plus I tend to burn all the meringue peaks I so lovingly shaped.

Swiss Meringue is also more dense and glossier, almost marshmallow-like. It pipes like a dream and holds its shape well without weeping for a much longer time than French meringue.

For this reason, it is great to use as a topping for this recipe for Flapper Pie especially if you aren’t serving it immediately.

How to make the best ever Flapper Pie:

Making a Flapper Pie is a pretty straightforward process but it requires a couple of steps. We start by making a peanut butter graham cracker crust.

Yep, we put peanut butter in there. Smooth or chunky – it matters not. And that’s actually the only part I add peanut butter to. You could add some more peanut butter to the custard if you’re really into the stuff but I think this is enough.

While we bake the crumb crust, we add some jam and raspberries to a pot and bring that mix to a boil. Add this fresh raspberry layer to your baked cookie crumb and let that set in the fridge. I out a layer of clingfilm on top to prevent a skin from forming.

Now we make the best vanilla custard with real vanilla, cream, milk and egg yolks. Yep – that’s a bit yummier than store-bought innit? Make sure to temper the egg yolks with some hot custard before adding the egg yolks to the mix. This step prevents curdling and makes sure we get a smooth and thick, rich vanilla custard.

Almost done! Now, pour the custard on top of the raspberry layer and cover with cling film. 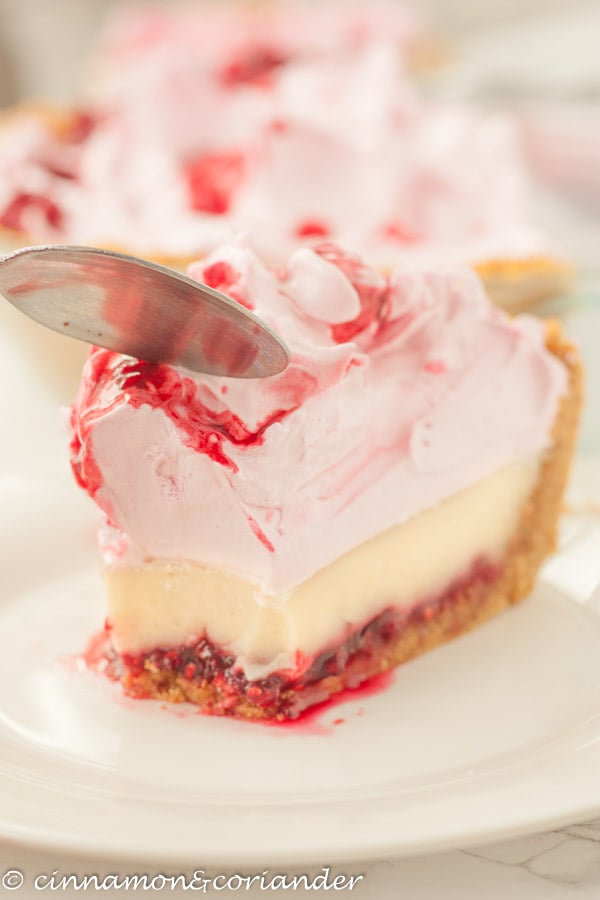 The raspberry meringue topping is super easy but you will need a kitchen thermometer for making it. We start by making a quick raspberry syrup which we then heat up to 240 F. In the meantime, we whisk some egg whites with sugar and cream of tartar until soft peaks form.

What are soft peaks?

Soft peaks barely hold their shape. The peaks flop over immediately when the beaters are lifted.

Then, turn up the speed of your stand mixer to the highest setting and add the hot syrup the egg whites in a thin slow stream. It will turn into a pale pink marshmallow cream in no time. There – you made Swiss Meringue. 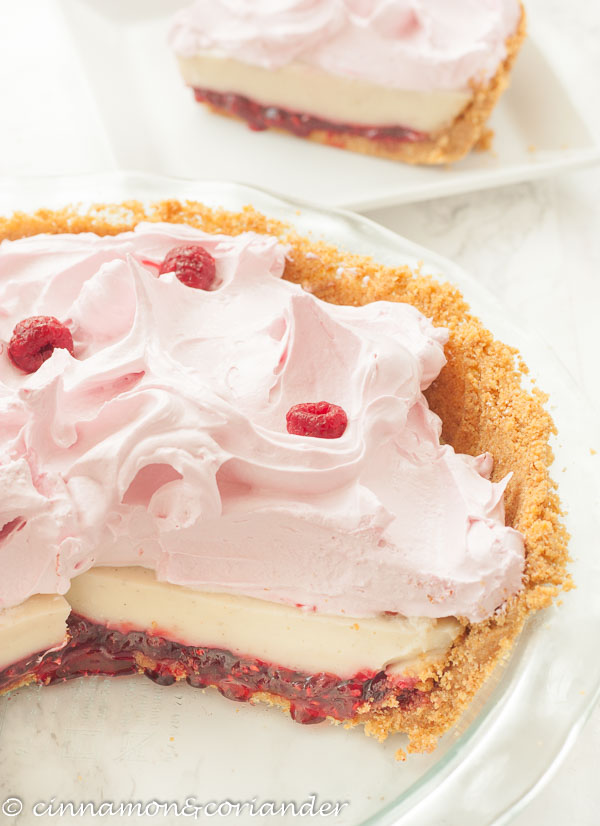 I love the contrast between the rich peanut butter crust, the vanilla custard, and the sweet and cloudlike marshmallow topping and the tart berries! Trust me, it does not taste heavy at all!

You will love this easy all Canadian Pie and find yourself craving it all summer long.

Can I make this Flapper Pie recipe in advance?

You can make the pie without the meringue topping and store it in the fridge. Shortly before serving the Flapper Pie, whip up the meringue and serve.

For more Canadian recipes, check out my Canadian Beaver Tail Donuts or my Maple Latte.

★ Did you make and love this recipe for Flapper Pie? Give it your review below! And make sure to share your creations by tagging me on Instagram!

For the raspberry filling