My easy recipe for Vegan General Tso’s Cauliflower is spicy-sweet and tangy like the original and will please meat-eaters and vegetarians alike. 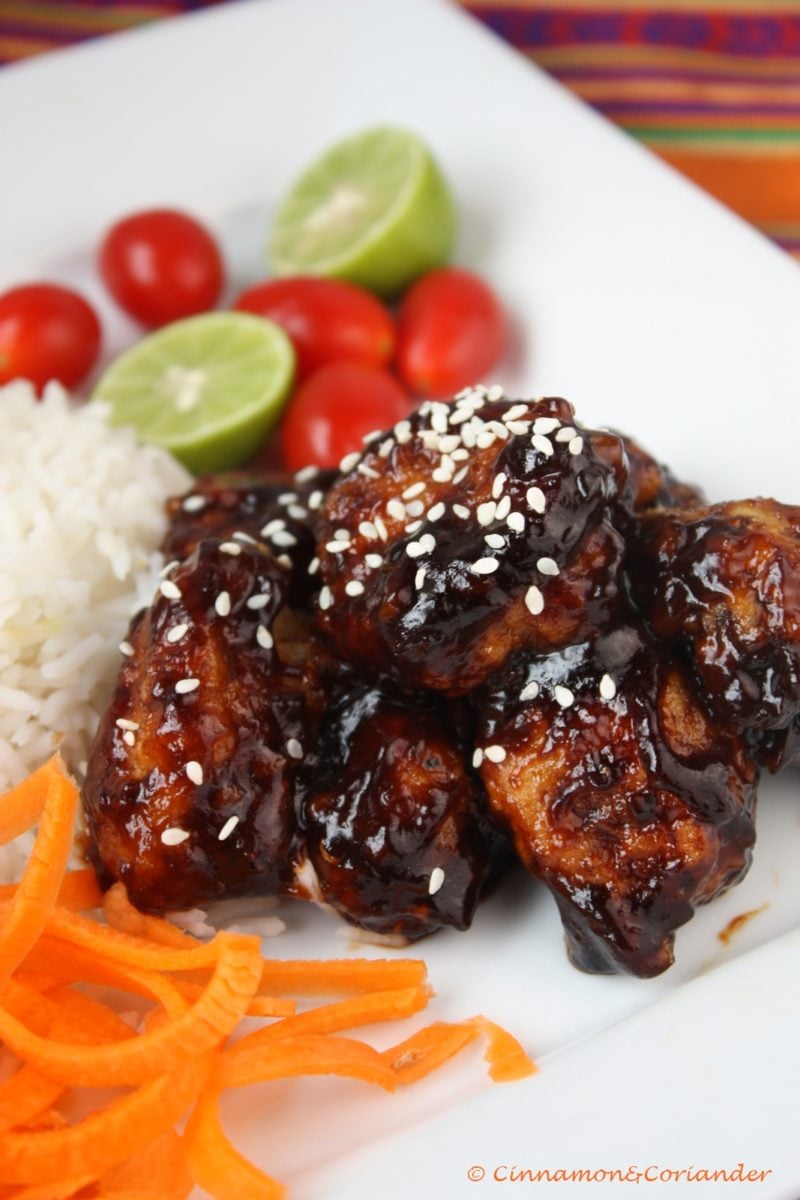 It’s almost weekend and its gonna be a cold one again, here in Northern BC. Another chance to hibernate on the sofa with some vino and watch The Crown all weekend long!

And then there’s Sunday brunch, of course! I That’s when my husband and I get those mid-morning cravings for sweet and tangy things. Like teriyaki chicken or BBQ ribs. Might have something to do with all that Saturday Vino.

I still prefer to believe that sleeping in causes that urgent need for sugar and salt, or shall I just say: For Take-Out Food.

However, one of our resolutions for 2017 is to cut down on the meat and this is when I started to up my veggie game and look for vegetarian versions of take-out classics.

And of course, the path leads me to last year’s veggie star, the cauliflower. Seriously, at this point, the question should be what you CANNOT do with this awesome vegetable. Well, one thing you maybe haven’t tried yet is General Tso’s Cauliflower. And you should. 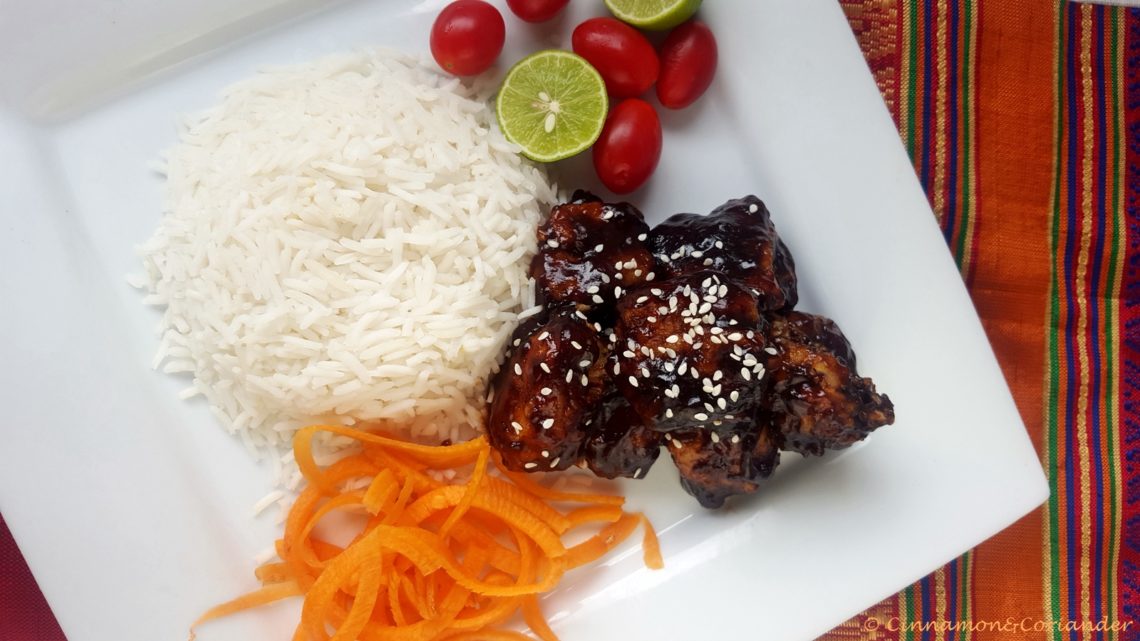 Make a batch of Vegan General Tso Cauliflower to curb that craving for Chinese Take-Out!

That’s right!  Tender cauliflower florets are breaded with rice flour and fried before getting tossed in this beautiful thick and shiny General Tso sauce.  When served right after tossing, the cauliflower is still crispy under the coating of sauce. Just imagine! 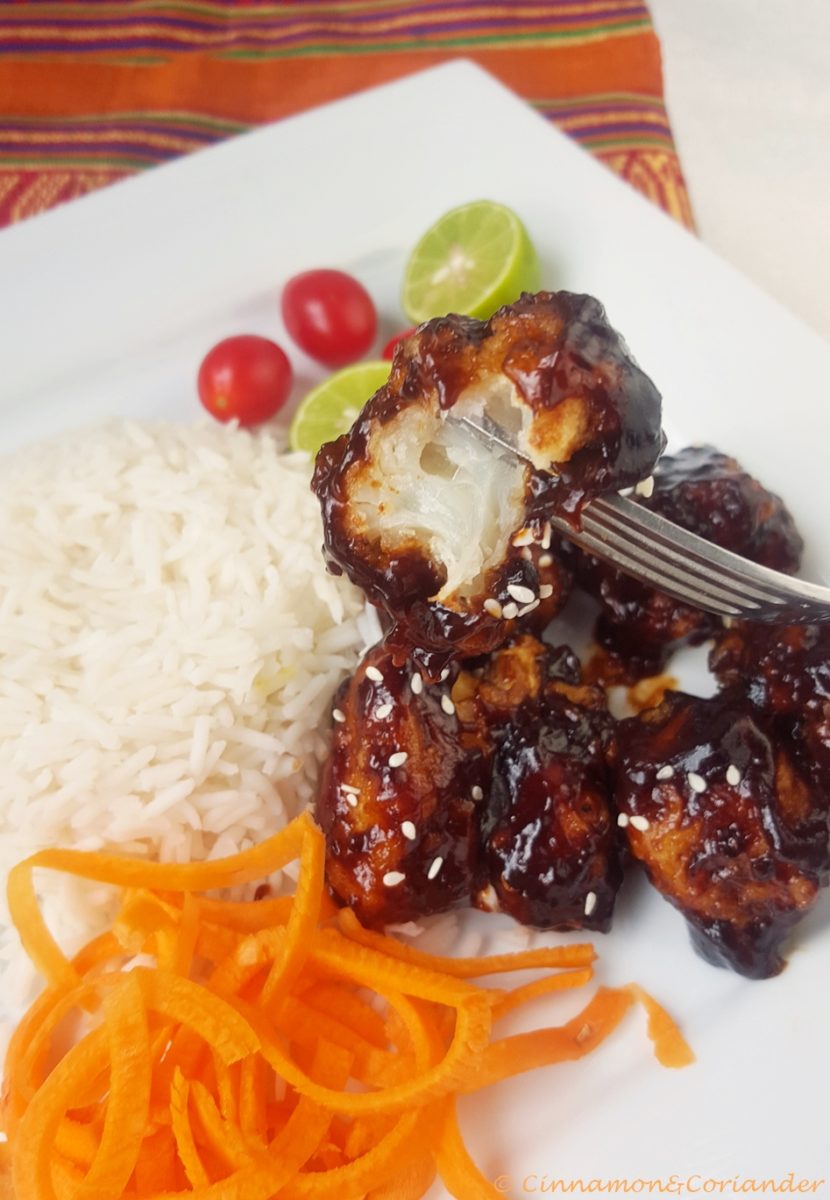 Seriously, if you like your vegetables and are a fan of  Asian-y flavours in general and Chinese Take-Out in particular. If you try to sell vegetables to kids or convinced meat-eater. Or If you just like to mix things up in the kitchen once in a while, then this Vegan General Tso’s Cauliflower is the recipe for you.

Can I bake this Vegan General Tso’s Cauliflower instead of frying it?

Yes, but then you might want to use a different coating to get the same crispy crunch! Preheat the oven to 400F.

For the coating, measure out:

Dip florets into the flour, then the coconut milk, and finally the panko and bake until crisp on the outside and tender on the inside.

Can I make this General Tso’s Cauliflower recipe gluten-free?

Absolutely, just use the recipe above, with gluten-free flour instead of flour for the coating. 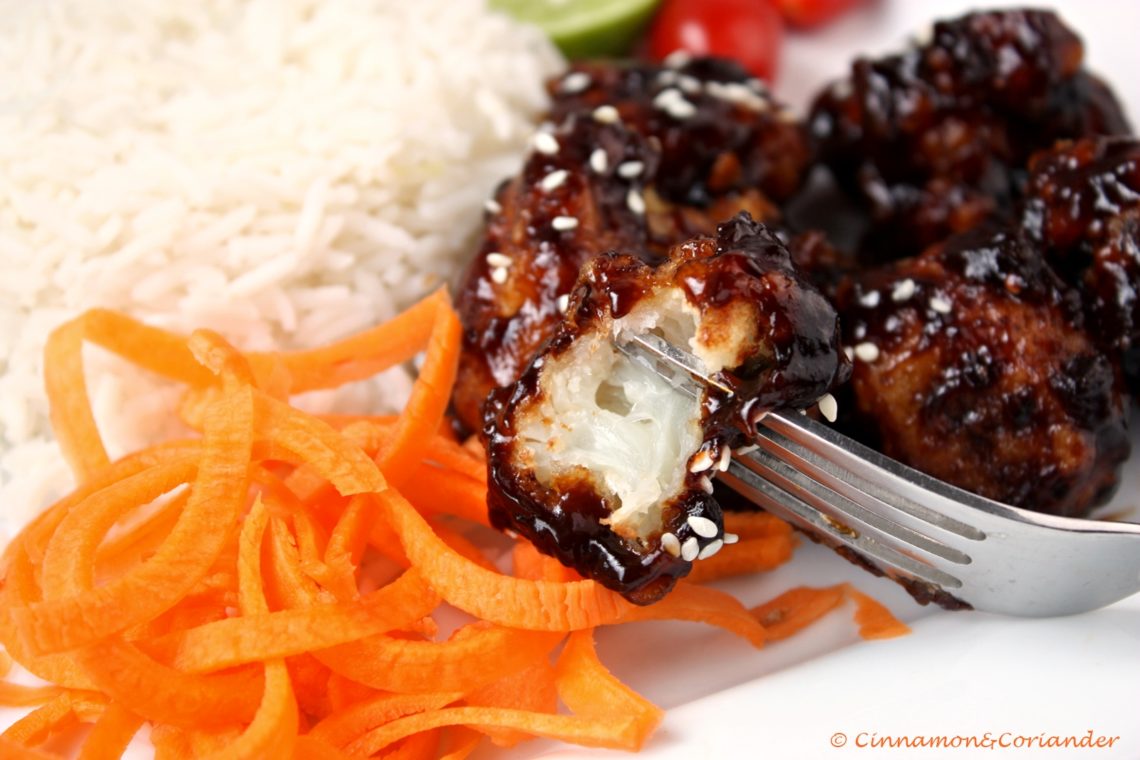 This recipe for Vegan General Tso’s Cauliflower is really easy to make. If you cook Asian recipes on a regular basis, there’s a chance that you even have all the ingredients in the house.

We start by making the General Tso Sauce, which is a mixture of rice wine, orange juice, soy sauce, garlic, ginger and chili. While this sauce reduces, we heat up some oil and coat the cauliflower in a rice flour-based batter.

After frying the coated cauliflower florets until crispy and golden, we toss them with our homemade General Tso Sauce and then you are done!

Yes, it’s that easy and you could have this for dinner tonight! Or, like us, all Sunday long.

★ Did you make and love this recipe for Vegan General Tso Cauliflower? Give it your review below and make sure to share your creations by tagging me on Instagram!

A meatless, vegan version of General Tso's chicken, replacing the chicken with crispy fried pieces of cauliflower. This healthy spin on a Chinese Restaurant Classic will be a hit with both adults and the little ones!

Serve with some rice and a salad for a full meal