Time to put the Toilet Paper in the fridge! Today I show you my beloved, expert approved recipe for Pork Vindaloo. The fiery, sweet and sour dish marked with all the little chilies in your Indian Restaurant’s menu.

I love a good curry and I’ve had many different verions of Vindaloo, both homecooked and at restaurants. This recipe for Pork Vindaloo is my personal favourite. It will blow your socks of.

You might know vindaloo as a very hot curry, but it wasn’t always that fiery. The word vindaloo comes from the popular Portuguese dish carne de vinha d’alhos meaning meat marinated in wine-vinegar and garlic, which was brought to India in the 15th century by Portuguese explorers. The dish was then adapted to local conditions: There was no red wine-vinegar in India, so a couple of creative priests fermented their own vinegar from palm wine incorporating local ingredients like tamarind, black pepper, cinnamon, and cardamom . The chile peppers were not a Indian addition, they had to be imported from the Americas. So Pork Vindaloo is one of the first East meets West dishes.  When the British occupied India later in history they grew quite fond of this dish and imported it to the Motherland. Once touching English ground the tangy curry met the same fate as many other Indian dishes. Forgotten was the practice of marinating and chilies became the predominant spice. This recipe is an original Goanese version. Less fiery, more aromatic.

It’s adapted from Dan, who shares authentic Indian recipes on his blog. He got this one from an Indian chef famous for his Pork Vindaloo. So this is pretty authentic, I’d say.

The recipe appears to be quite complicated but once you have all the spices measured out it’s really quite easy and quick to prepare. 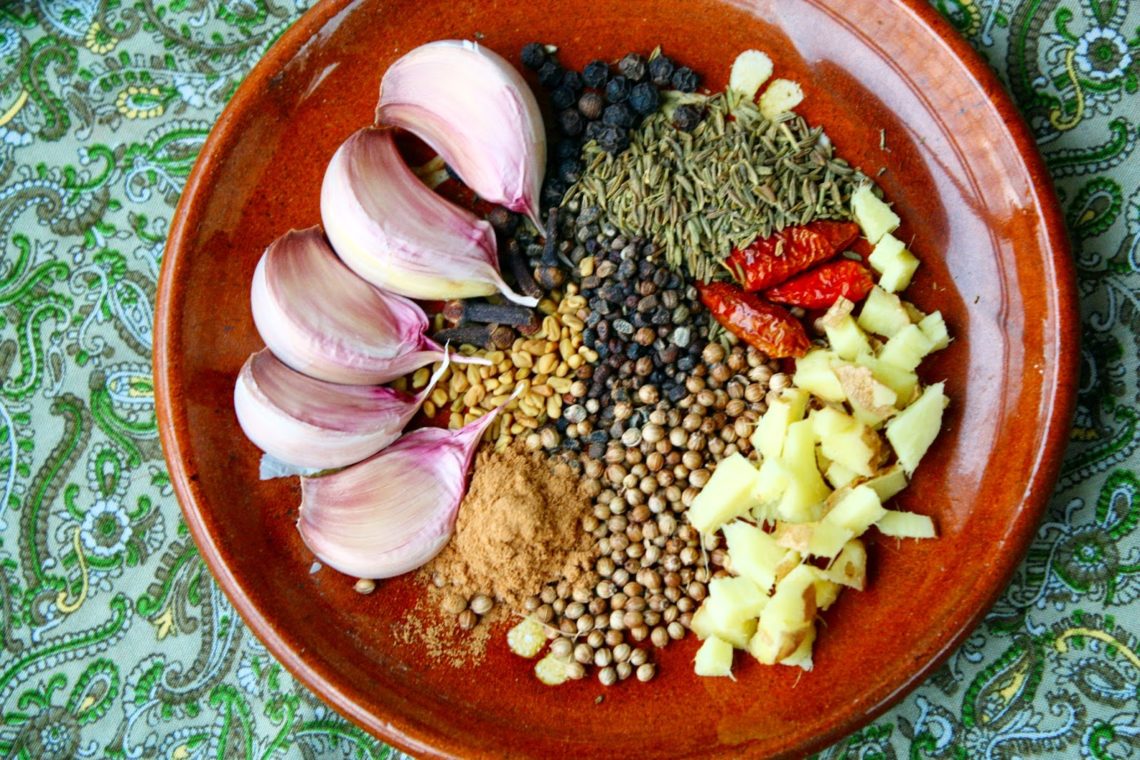 This recipe for Pork Vindaloo serves 4

Remember to start with the marinade. The dish tastes best when you leave the meat to marinate for 48 h !

Start with preparing the marinade.
Place all the spices except the turmeric in a dry frying pan over medium heat and fry until they become fragrant but are not yet smoking.
Place the warm spices in a food processor with the turmeric and blend to a fine powder.
Add the chillies, vinegar, tamarind paste, brown sugar, garlic and ginger and blend until smooth.
Put the pork in a large glass bowl with the marinade and stir well to combine.
Leave the pork to marinate for eight to 48 hours. The longer the better.
To finish
When ready to cook, heat the ghee or oil in a small saucepan over low heat.
Add the garlic and allow to cook gently on low heat for about 15 minutes. It is important not to burn the garlic so keep the temperature low and watch carefully. The garlic should become translucent but not too browned.
Once you’ve reached that stage remove the garlic from the saucepan and set aside.
Pour the garlic infused ghee/oil you used into a frying pan and put on medium heat.
When it is hot, add the curry leaves and mustard seeds.
When the mustard seeds begin to pop and sizzle, throw in the chopped onions.
Fry them for about ten minutes over medium high heat until the onions are soft and translucent. Be sure to stir regularly so that the spices don’t burn.
Add the chopped tomatoes, chilli powder and the pork with all its marinade to the pan and then pour in just enough water to cover.
Leave to simmer for about an hour until the pork is very tender. Add salt to taste. Also, you may need to add more water while simmering.
Stir in the cooked garlic and squeeze the lemon juice over the top.

Grate the cucumber and chop the Spring Onions and Mint. Grate the ginger finely. Mix with the remaining ingredients in a bowl, cover and refrigerate for at least an hour. 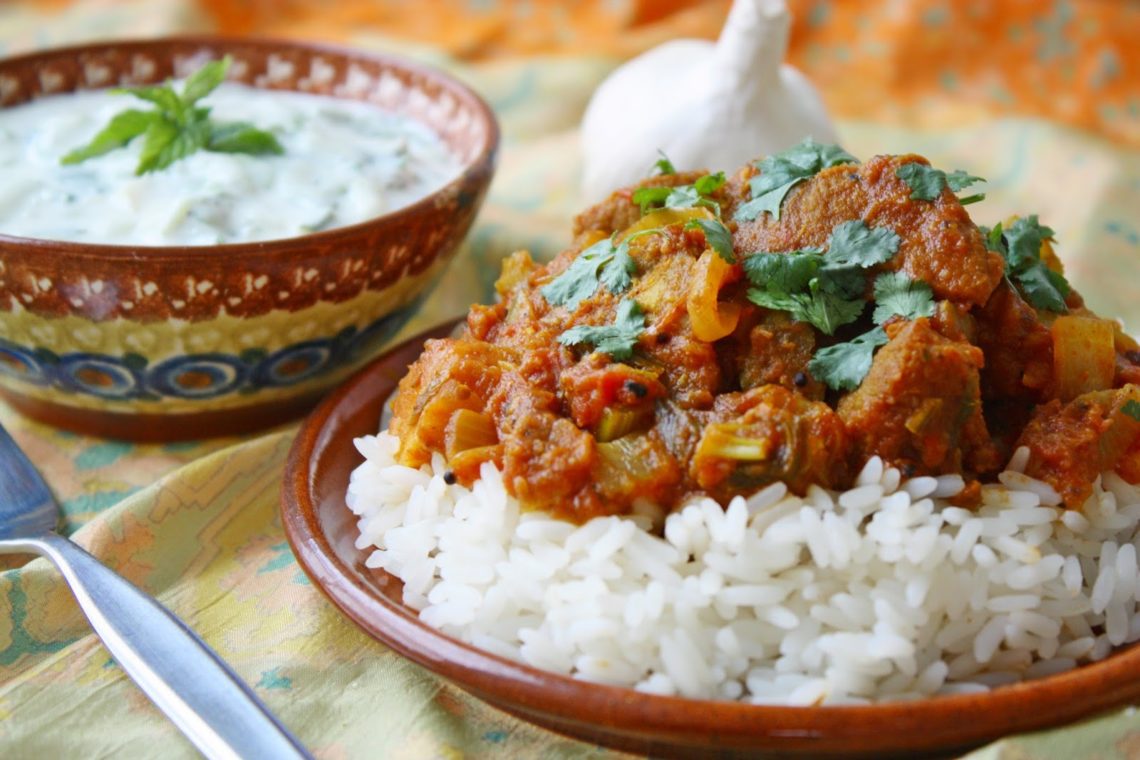