A showstopping challah bread with a za’atar spiced filling baked around a  ceramic dish, which holds the dip! These Za’atar Bread Rolls make for a perfect centerpiece for the dinner table. 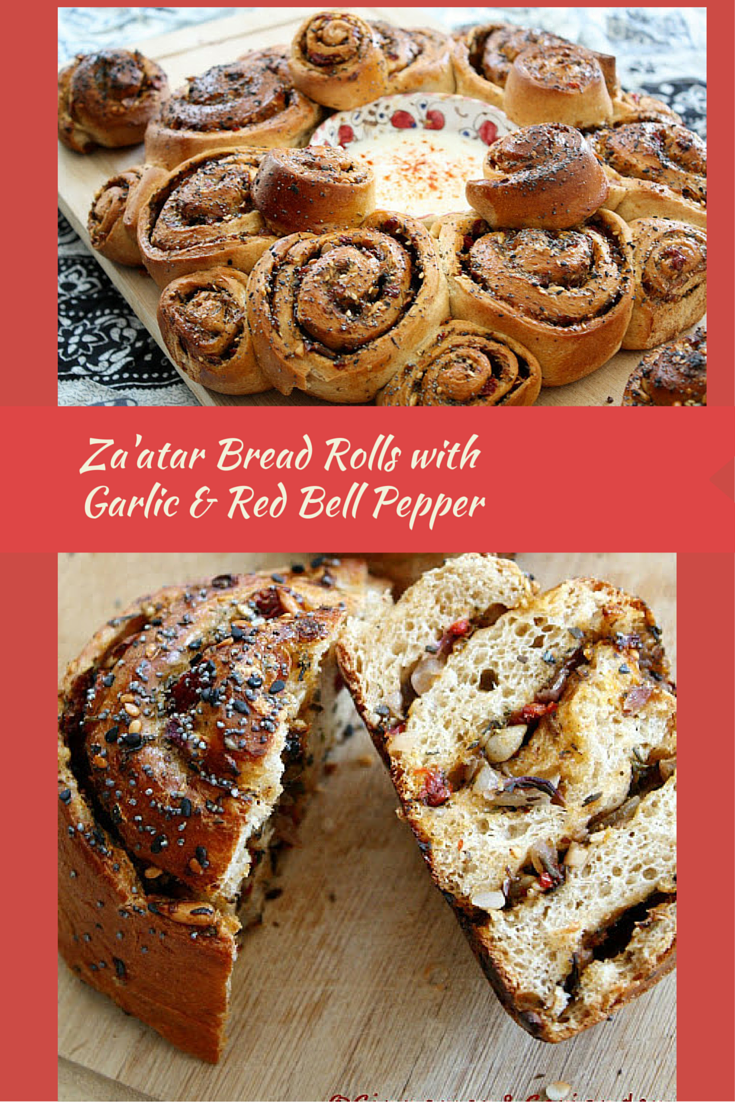 This beautiful challah bread centerpiece comes from my all time favourite Great British Bake Off contestant Kimberley Wilson and her Peace Bread, which was her showstopper bake for bread week!
Imagine buttery bread rolls filled with a fragrant mix of Roasted Red Bell Pepper and Garlic! I added some sunflower seeds as I really love the slight crunch and nutty aroma they add to the bread!! The filling is seasoned with za’atar, which lends the bread a middle eastern touch. 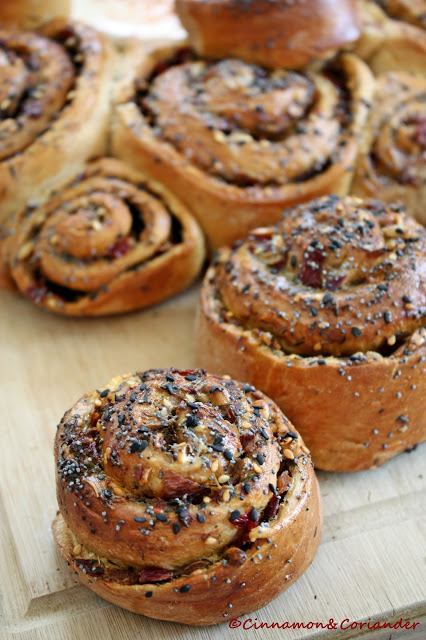 The za’atar bread rolls are crispy on the outside but the dough inside is incredibly soft and rich. Almost like a brioche. Instead of butter, Kimberley used olive oil in her dough and so did I. It turned out incredible and was surprisingly easy to work with after the first proof. For the first kneading, you really want to use your kitchenaid as it gets rather sticky!
The filling consists of a mix of pan fried onions, garlic, red bell pepper and some mixed seeds. I opted for sunflower seeds plus the sesame seeds, which form part of the za’atar mixture. The arabic touch comes from the added za’atar spice, which is a mix of several herbs and seeds. I’ll attach the recipe for those of you who can’t buy it as a spice mix.

Baking the za’atar bread rolls around a ceramic dish is such an easy way to turn this loaf into a showstopper! I should try this with a sweet loaf and a cream cheese dip some day. 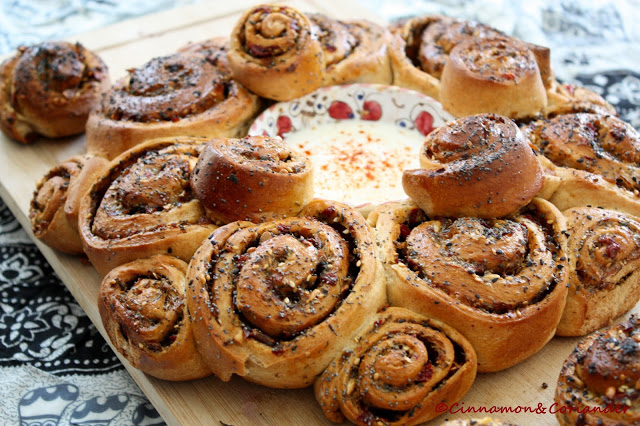 For the challah dough

In a medium pan heat the milk and water to about 37 degrees. When it is warm enough add yeast, sugar, honey and 100g of the flour. Leave this to one side until it is foamy, about 10-15 minutes.

Meanwhile beat the oil into the eggs and put the remaining flour and the salt into the bowl of a stand mixer set with a dough hook.

When the yeast mixture is ready and all foamy whisk in the egg-oil mixture and add to the flour and knead on a medium speed until window pane stage. Cover with plastic film and let rise until doubled in size. Meanwhile prepare the filling

for glazing: egg wash and some poppy and sesame seeds

Mince garlic and onions and chop the roasted and peeled red bell peppers into fine chunks. (I put the bell peppers on the BBQ until blackened, than let them cool and peeled them under cold water). Fry the white onion and 1 of the red onions in a pan with 1 tbsp of oil. After 10 minutes or so turn up the heat and add the sugar. Let caramelize  and add the garlic , the other red onion and the bell pepper. Add the sunflower seeds and the za’atar and let the filling cool down.

Roast sesame and cumin and coriander seeds and grind them in a coffee grinder or a processor. Add the rest of the ingredients and store in a jar in a dark cool place.,

Once your dough is ready scrape it out of the bowl and cut off a fifth of the dough for the upper ring of the loaf and set aside. Roll the remaining dough into a rectangle of roughly 18in x 10in, with the long edge towards you. Brush the 30 g of softened butter over the dough and then spread the dough with 4/5 of the spiced onion mixture.

Roll the dough into a log and cut into 12 equally sized rolls just like with cinnamon rolls. Do the same thing with the leftover dough that you put aside and cut into 15 rolls.

Now prepare a baking sheet and arrange your za’atar bread rolls around your ovenproof ceramic dish. 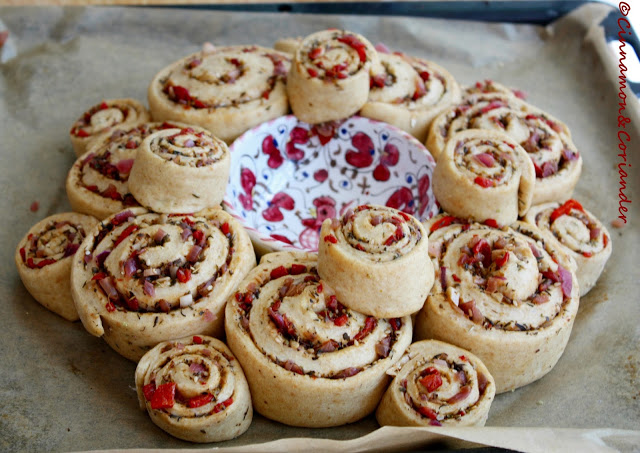 Cover with oiled foil and let rise for another 30ish minutes while preheating the oven to 190 Celsius.

Brush the za’atar bread rolls with egg wash and sprinkle with poppy seeds and sesame. Let bake for 35 minutes until golden brown.

Serve your Middle Eastern Za’atar Bread Rolls with a nice dip! Make sure to let the loaf and the ceramic dish in the middle cool down a bit. Learn from my mistakes!!!!

Especially when served with a dairy based dip!!