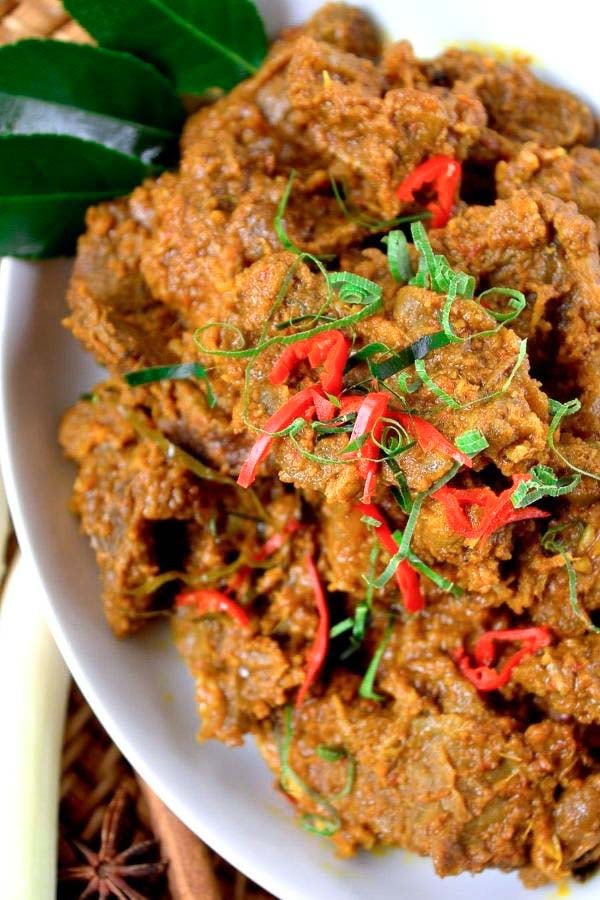 This authentic Malaysian Beef Rendang recipe is a MUST TRY for curry lovers! This boldly spiced Asian Beef Stew with coconut is seriously tasty and can be made in a slow cooker or Instant Pot!   Jump to Recipe

One thing I love about living in Canada, is the availability of exotic Asian ingredients. Back in Germany, cooking an Asian dish meant spending hours running about town in search of kaffir lime or shrimp paste. Here, I find everything I need in one single store and cooking Asian dishes all of a sudden became so much easier and more fun. Less time spent shopping means more time for cooking!

Today’s Malaysian Beef Rendang recipe is one of those Asian dishes which take a bit of time but every single step is super fun and the result is so worth the effort! 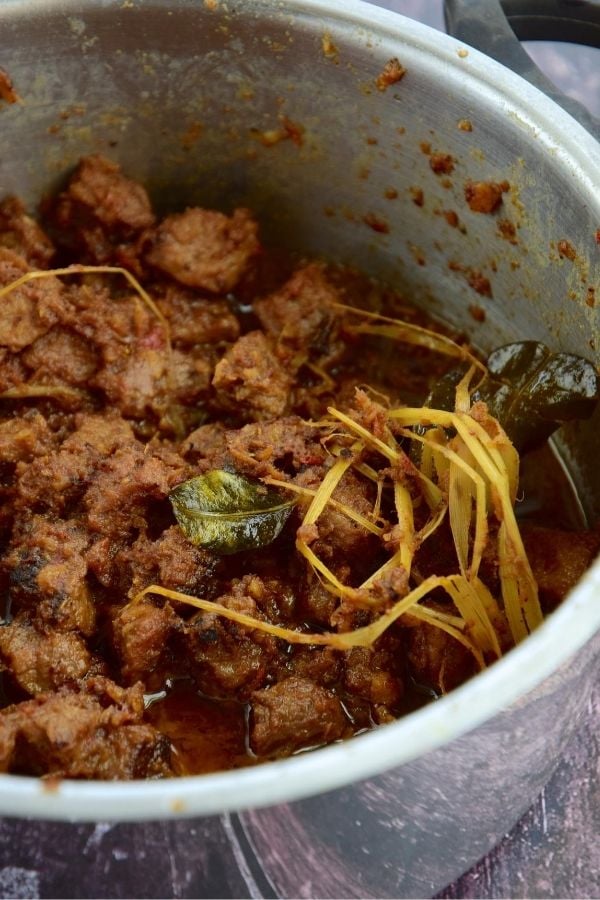 What is Beef Rendang?

Beef Rendang Curry has an incredible depth of flavor and the taste is bold, multi-layered and complex due to all the Asian spices we are gonna use. You will love it! And have I mentioned that this tasty Malaysian beef curry was chosen the number one dish of CNN International’s “World’s 50 Most Delicious Foods “?

Today’s recipe for Beef Rendang is a so-called dry curry,  which means that there’s not a lot of sauce left in your pot when the meat is done. However, after slow cooking, the meat turns out so tender and has a thick coating of grated coconut and thickened sauce on each piece. It falls apart as soon as you touch it with a fork and can be mixed with rice so easily! 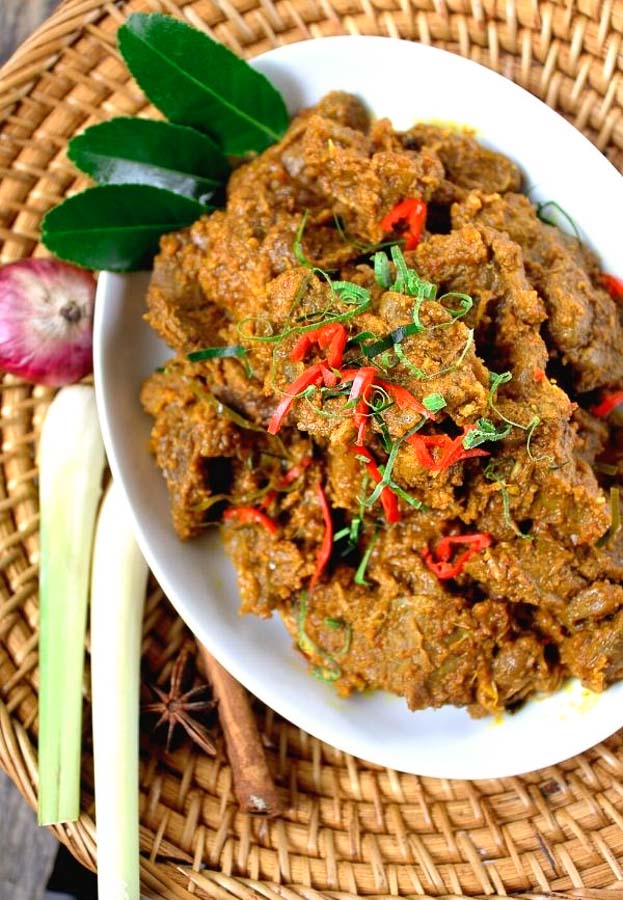 This is one of the Asian curry recipes that require a bit of prep work. First off, we make a quick spice paste from garlic, ginger and chilies! To thicken the curry, we draw on a Malaysian Cooking Secret: kerisik, which is basically just toasted, desiccated coconut! It is the secret to the nutty caramelized flavor of a perfect rendang dish. 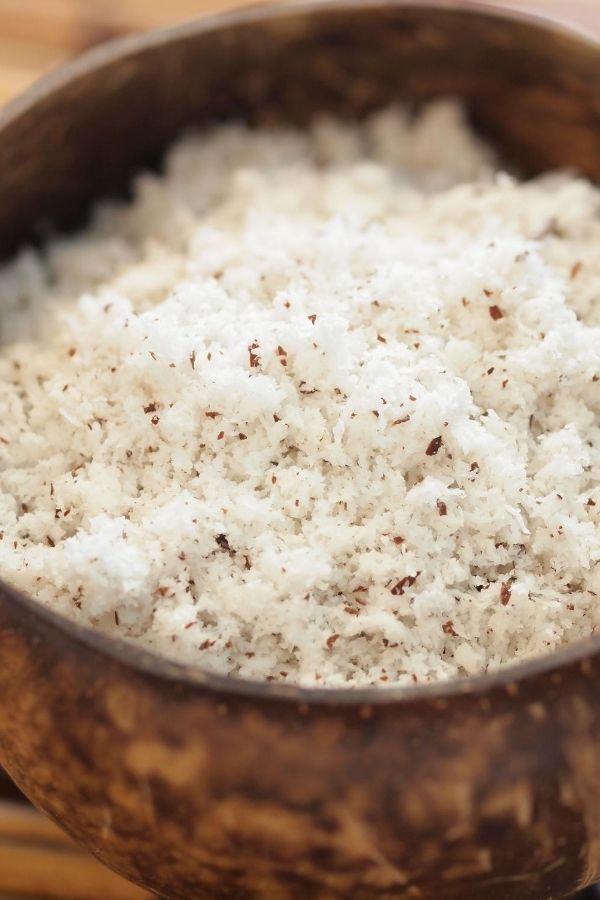 That’s right! We toast some desiccated coconut in a pan until fragrant and golden brown! I like to blitz the coconut once it has cooled down a bit to get a finer texture. You can also use a mortar and pestle! And there you go, you have made kerisik!

The best kerisik uses freshly grated coconut which is carefully toasted over low heat until it reaches the ideal golden brown shade. However, you can also use unsweetened desiccated. The toasted coconut is then pounded until the natural oil is released. This results in a shiny oily brown paste which is referred to as kerisik.

Not only does it thicken our Beef Rendang, but it also adds a wonderfully round and slightly sweet coconut flavour which is further enhanced by the addition of coconut milk. 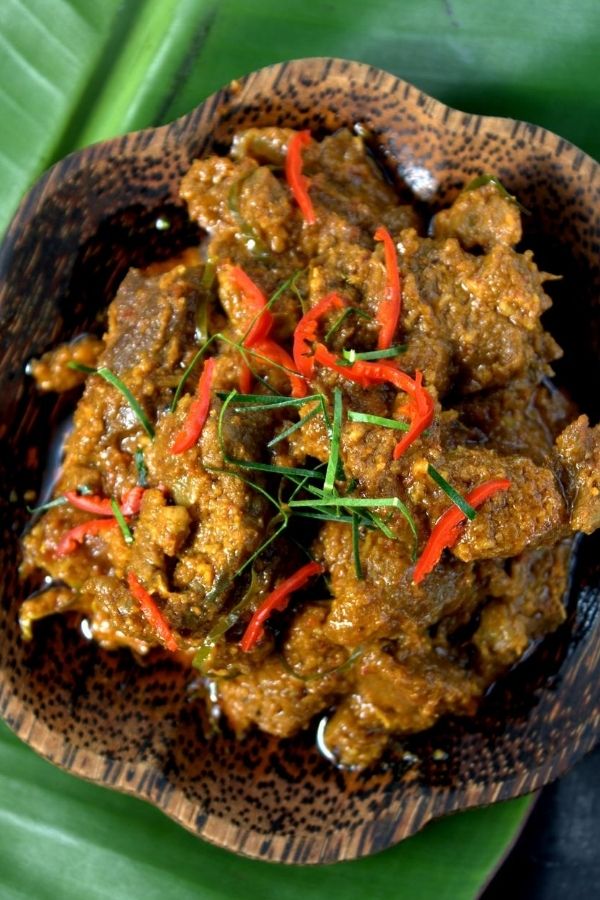 Seriously, this authentic Beef Rendang might be one of my new favorite curry dishes and I am SO glad I tried it even though it looks, well, rather unspectacular at first sight. The flavor, you guys, makes up for the visual shortcomings!

As with so many slow-cooked meat stews, Beef Rendang gets better with time so you might want to double the recipe and save those leftovers for later.

★ Did you make and love this beef rendang recipe? Give it your review below! And make sure to share your creations by tagging me on Instagram!

Beef Rendang is a MUST TRY for curry lovers! This boldly spiced Malaysian Beef Stew is seriously tasty and has an incredible depth of flavour! The perfect meal for a fun weekend dinner party with friends.

For making in the Slow Cooker

Beef Rendang, like other slow cooked curries just gets better with time so make a whole bunch! Great on the day and fantastic the next day. Freezes well too.