Having lived in Canada for the last 4 years, I ‘ve seen quite a bit of this huge country. However, I have not made it to the Maritimes yet which is top top top of my travel bucket list! One of my major motivations – apart from the breathtaking landscapes and lovely people – the sheer abundance of wild blueberries in the provinces Nova Scotia, New Brunswick, PEI and Newfoundland!

If the Maritimes had an official dessert, it might just be Wild Blueberry Grunt. This easy stovetop blueberry dessert is pure Canadiana!

What is Blueberry Grunt?

So, what is a Blueberry Grunt? YES, there’s a legit explanation for the funny name is coming right up.

It’s a Canadian blueberry cobbler. But one with superpowers because you don’t need to turn on the oven! You cook it on the stove top – or campfire, if you’re an outdoorsy person. Aren’t camping desserts THE BEST?

What sets it apart from a blueberry cobbler is that the sour cream dumplings steam instead of bake. Like chicken and dumplings – just with light lemon dumplings and blueberry sauce!  The simmering blueberries make a ‘grunting’ noise as the steam moves through the dumpling batter, hence the name: Grunt.

I have also come across the name Slump for this kind of blueberry cobbler since that’s what it does when you try and put it on a plate.  Yep, I did this photoshoot twice. All the vanilla ice cream in the world could not make that messy plate of blueberry grunt pretty.

Talking about vanilla ice cream – yes that’s what is typically served with a Nova Scotia Blueberry Grunt. I had mine with a scoop of my homemade Basil Ice Cream and it was insanely delish!

The origins of the blueberry grunt are unclear. Some claim it was first made by early colonial settlers as an adaptation of British pudding using local ingredients, while others claim it originated as a form of Acadian “forage food.”

It is most likely the result of both of those factors combined.

I got my original Blueberry Grunt recipe from a Canadian cookbook I found in my in-laws’ cookbook collection, which I promptly borrowed.

I have adapted the blueberry grunt recipe ever so slightly to suit my own tastes but essentially, this is a pretty traditional Nova Scotia grunt! 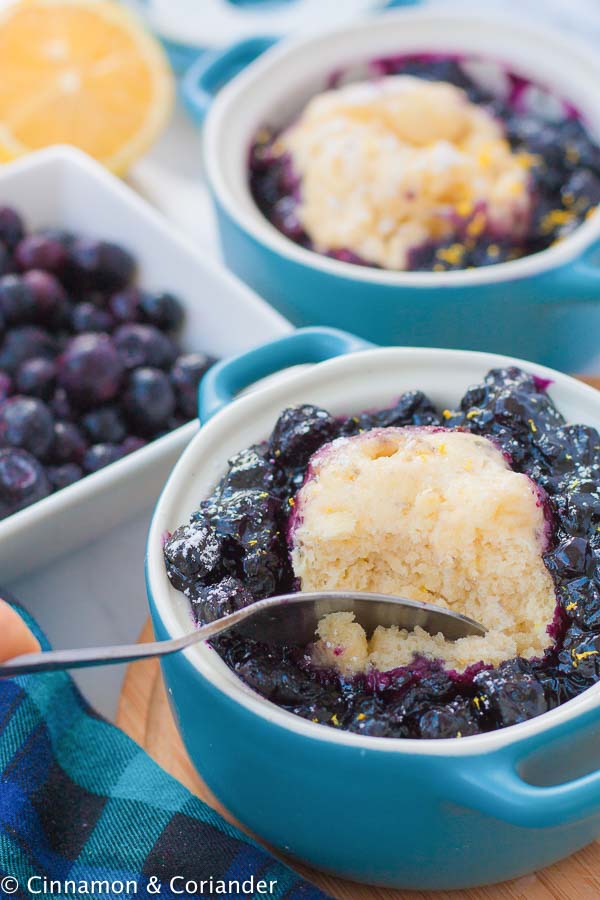 Why you’ll love Blueberry Grunt even more than Blueberry Cobbler: 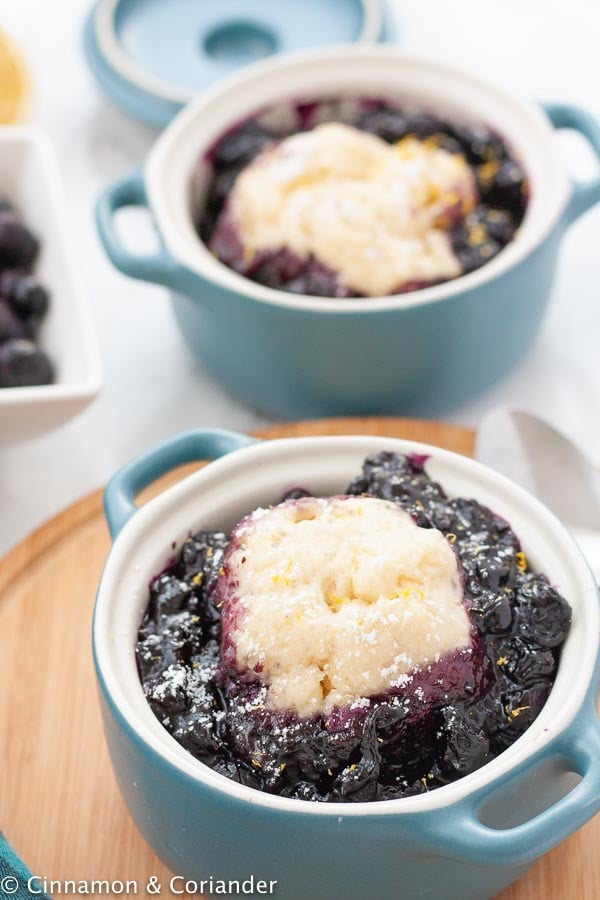 Guys, there’s something special about a house filled with the aromas of simmering berries, vanilla and lemon! They should sell that smell in bottles! I would buy it on everything including myself!

How to make the best ever blueberry grunt recipe:

We start by making homemade lemon sugar which will go both into the blueberry sauce and the lemon dumplings.

Next, we simmer berries and sugar until the mix reaches a jam-like consistency. Right at the end, I like to add a pinch of cardamom and cinnamon along with some freshly squeezed lemon juice.

While the blueberries are simmering, we quickly stir together the batter for the dumplings which we then scoop on top of the blueberry sauce.

Now close the pot with a tight-fitting lid and let everything simmer for 14 minutes or until the dumplings are light and fluffy. Do not peek!

That is it, you guys! You made one of Canada’s most iconic desserts – and in a cinch! 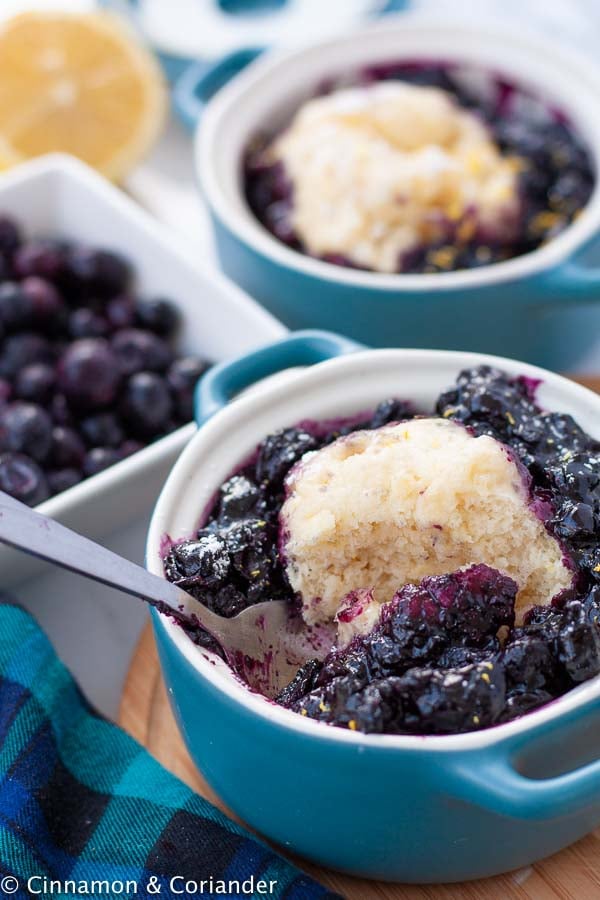 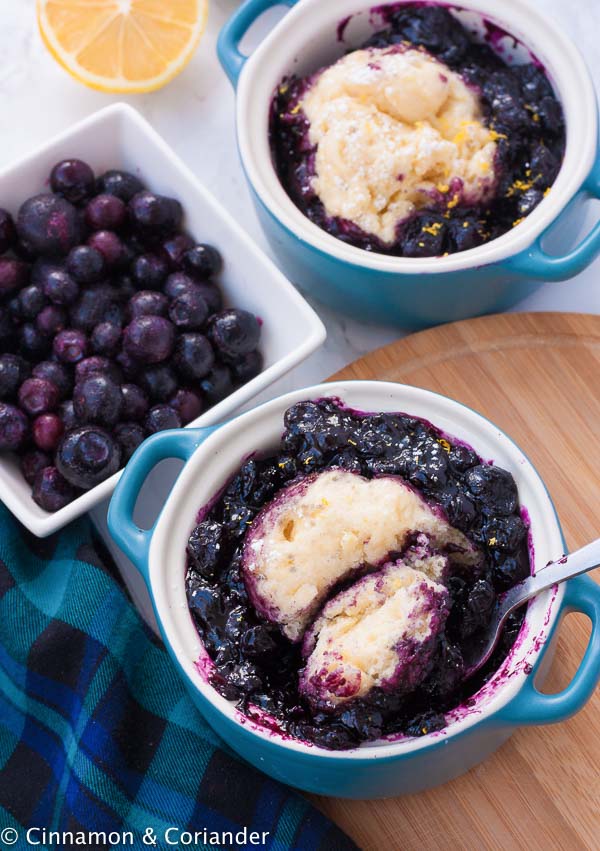 Variations on this recipe:

Blueberries can be swapped for strawberries, peaches or rhubarb, or a mix of those. Another nice version would be one with Saskatoon berries if you have a tree in your garden. But blueberries are the most traditional and popular.

The pinch of cinnamon, cardamom and lemon zest are my additions to jazz up the flavour of this blueberry grunt, but you can certainly leave them out.

But hey, you can also take this game further and add some more cardamom to the blueberry stew and skip the cinnamon. Blueberries and cardamom go really well together, ask anyone from Scandinavia! 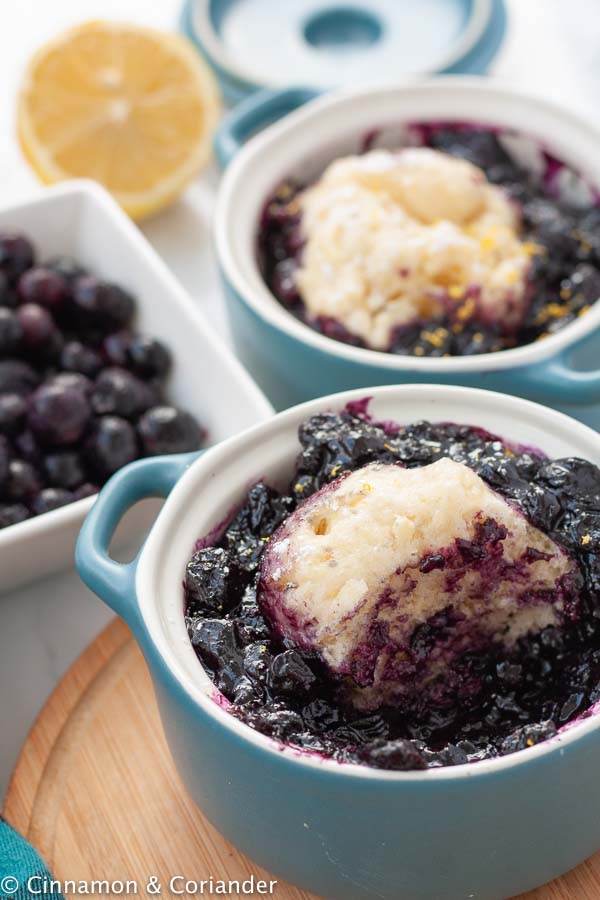 f you love blueberries, then you can’t go wrong with this easy stove-top dessert. For a special treat, serve your Blueberry Grunt warm with vanilla ice cream, my basil gelato or a dollop of sour cream.

What’s The Difference Between A Blueberry Grunt, Cobbler, And A Crisp?

All of these delicious blueberry desserts are very similar indeed and it’s easy to confuse them. To be frank, though, a grunt, is just another name for a blueberry cobbler but all grunts are made on the stove-top whereas cobblers tend to be baked. A ‘grunt’ can also be called a ‘slump’ depending on where in the Maritimes you are. That leaves us with cobblers and crisps.

★ Did you make and love this blueberry grunt recipe? Give it your review below! And make sure to share your creations by tagging me on Instagram!