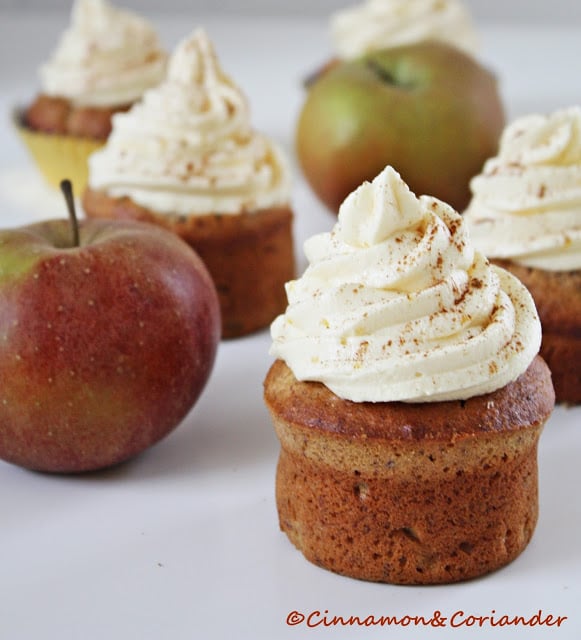 These apple strudel cupcakes are a real treat! They are studded with apples and raisins and topped with a custard based German Apple Cinnamon Buttercream! 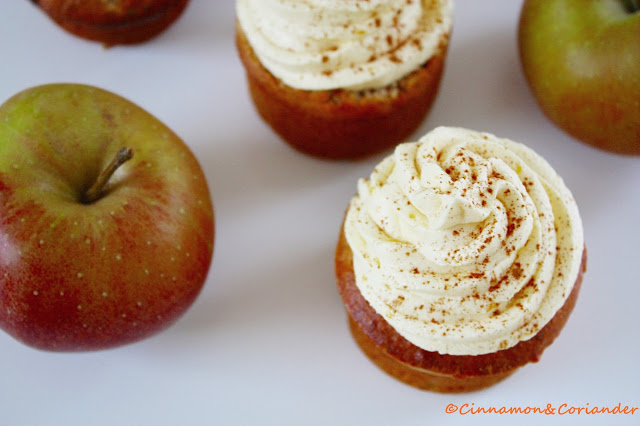 Core, peel and grate the other half of the apple and mix with the leftover yoghurt, sugar, vanilla and oil. Add eggs and stir well. Add this mix to the dry flour mixture and combine. When dough comes together, add the apple yoghurt from before along with the raisins and, if dough is to dry another 1 tbsp of the rum from the raisins.
Scoop batter into muffin tins, filling them only 2/3 full. bake about 10 to 12 minutes, inserting a toothpick to check batter for doneness.

For the German Apple & Cinnamon Buttercream

In a pot heat apple juice and milk on medium high heat. In a little bowl, make a slurry of sugar, custard powder and a couple of tbsp of the milk-juice-mix. Add slurry to hot milk, stirring with a whisk. Let custard bubble for about 2 minutes, stirring, then pour into bowl, cover with cling film and let cool to room temp. Butter and custard got to have the same temperature when making German Buttercream.

Pass custard through a strainer, if it is a bit chunky.
Beat butter using a whisk for about 2 minutes. Then add custard tbsp by tbsp while continuing to beat.  Add cinnamon.

Should the buttercream be to still, add a bit of warm coconut oil. If it curdles, heat it up in a baine marie and whisk until it comes back together.
Pipe frosting on the cupcakes, using a star tip, dust with some cinnamon and serve.